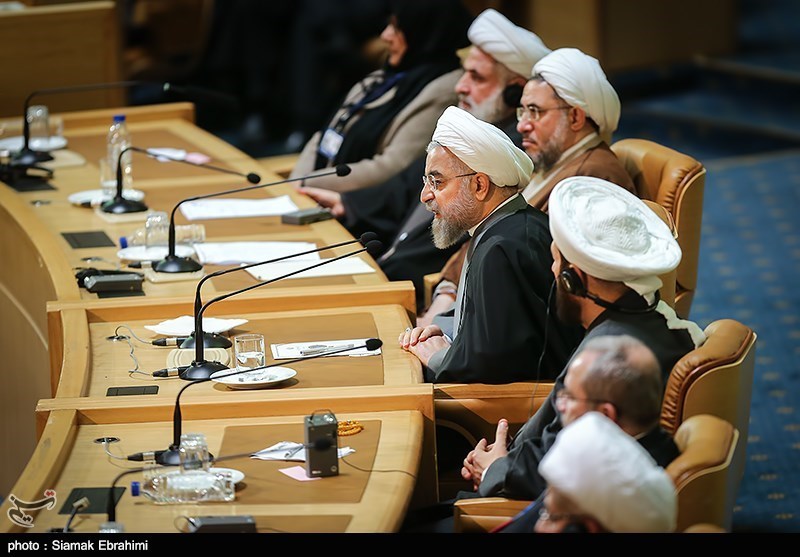 TEHRAN, Jan. 07 (MNA) – In his speech at the opening ceremony of 28th International Islamic Unity Conference today, President Rouhani stressed on a practical cooperation to bring about unity among all Muslims.

The 28th international conference organized by World Forum for Proximity of Islamic Schools of Thought (WFPIST) with the title “United Islamic Ummah: Challenges and Solutions” kicked off today in Tehran with an opening speech by Iranian President Hassan Rouhani.

Addressing an assembly of some 500 prominent figures from 65 countries around the world, President Rouhani called on the Islamic states to make use of all existing mechanisms to form unity; “unity cannot be realized through words alone; by chanting mottos and holding conferences unity cannot be achieved. We must begin a practical Islamic cooperation among different religious denominations,” he said.

While asserting that unity does not mean quitting one’s path, but rather ‘patience,’ ‘tolerance,’ and ‘courage,’ Rouhani stressed on removing all conflicts of interests and finding out common threats against the Islamic world.

“We must all feel responsible for one another’s land; we must consider a threat to one nation as a threat to our own; we must come to this conclusion that unity will be to the benefit of all of us,” he said.

President Rouhani touched upon one of the most critical issues in the region, namely the atrocious activities of terrorist groups who have tarnished the image of Islam, adding, “Islam is the harbinger of prosperity; a religion of simplicity and moderation. It is not a religion of violence and extremism.”

He also stressed that the Islamic Republic, as a major regional power in the world of Islam under the guidance of the Leader, supports any nation that resists violence and terrorism; “be it Gaza, Afghanistan, Pakistan, Iraq or any other part of the world, Iran stands by any nation who fights to liberate its land from the occupation of usurpers.”

While strongly condemning any abuse of the name of Islam and religion by a group of ‘mercenaries’ that are after plundering Muslim resources by creating discord among the Muslims, Rouhani added, “the world of hegemony and arrogance is seeking to undermine Islam and dominate Muslim lands; this calls for tremendous efforts on our part to set aside minor differences and focus on important issues. We must take action and resist the oppressors and those who have deviated from the path of righteousness.”

The 28th International Islamic Unity Conference attended by a great number of Islamic world’s thinkers, intellects and officials is held from 7 to 9 January at Darya-ye Noor Conference Hall in the Parsian Esteghlal International Hotel, Tehran.