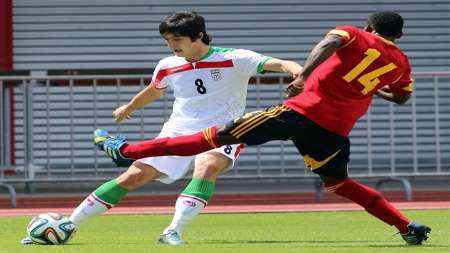 Morale boost for Iran ahead of Asian Cup

Tehran, Jan 5, IRNA — Iran registered a 1-0 morale boost with a win against Iraq ahead of the 2015 Asian Cup in Sydney, Australia on Sunday.

On two occasions, shots were sent over the bar from close range: the first came from Iranian midfielder Vahid Amiri while the second by his teammate Vorya Ghafouri, much to the chagrin of the large band of Iranian fans who turned out for the game.

In the 55th minute, Azmoun claimed what was to turn out to be the only goal of the game when he broke through the Iraqi defense to poke the ball into the net with the outside of his foot before wheeling away to celebrate wildly with the Iranian bench.

However, Younus Mahmood skied his penalty kick over the bar to waste the opportunity to equalize.

Five minutes later Mahmoud had another golden opportunity from close range, but this time he was denied by the near post.

Both coaches made changes as the second half wore on, but it made little difference to the result as Iran claimed the victory. Amiri could have put the result beyond doubt in the final moments but his shot was scooped over the crossbar.

Iran is drawn in Group C of the tournament along with Qatar, the UAE and Bahrain. Iraq will face Japan, Jordan and Palestine in Group D. Iran and Iraq may again face each other in the second round of the AFC Cup.

In its opener, the three-time Asian champion Iran will array against Bahrain at Melbourne’s Rectangular Stadium on January 11.

Uzbekistan, Saudi Arabia, China and North Korea are drawn in Group B.

The AFC Asian Cup will kick off on January 9 and will run until January 31.

The winner of the tournament will book a ticket to the 2017 FIFA Confederations Cup in Russia.

It is the first time that the Asian tourney is being hosted outside the continent.