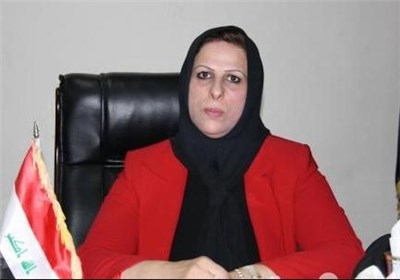 TEHRAN (Tasnim) – An Iraqi lawmaker asked Baghdad to sue the United States over its assistance to the terrorists of Islamic State in Iraq and the Levant (ISIL) group.

Al-Sumaria TV quoted Aliya Naseef as saying that the Iraqi foreign ministry should file a lawsuit against the US at the United Nations over Washington’s supports for the ISIL militants.

In October, a video showed the terrorist group captured a bundle of US weapons airdropped in the Syrian border town of Kobane.

The US military admitted that it had dropped 28 bundles filled with grenades, mortar rounds and other supplies that were intended for Kurdish fighters.

The US Central Command claimed that the airdrops, including weapons and ammunition, and medical supplies, were “intended to enable continued resistance against ISIL’s attempts to overtake Kobane.”

In reply, Naseef said that the repetition of such airdrops shows that the move was a deliberate aid, adding that it was against international laws and conventions.

Earlier, another member of Iraq’s parliament, Majid al-Qarawi, had also described the United States as the number one suspect in supporting the ISIL terrorist group, adding that reports about US military dropping weapons in areas held by ISIL proves the support.

The ISIL is a terrorist group believed to be supported by the West and some regional Arab countries.

The extremist group, which controls parts of Syria’s northern territory, sent its fighters into neighboring Iraq in June, quickly seizing large swaths of land straddling the border between the two countries.