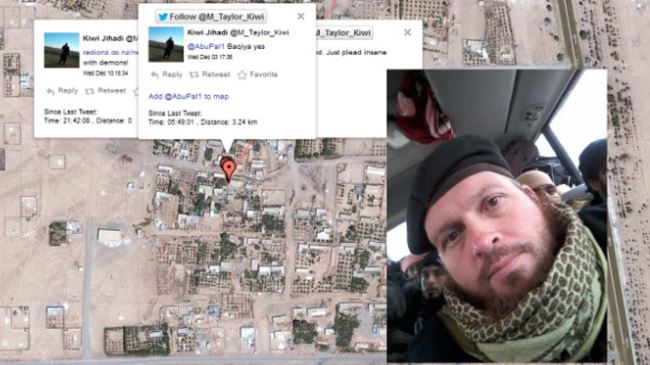 An ISIL Takfiri militant from New Zealand has accidentally revealed his whereabouts by posting tweets.

The report pointed out that the terrorist had been in the northwestern Syrian area of Kafar Roma in October and in the northern city of al-Tabqah in Raqqah Governorate in December.

The terrorist later removed the tweets after he learnt about his mistake, the report added.

Jeff R. Weyers, a researcher and consultant at iBRABO, said that spotting ISIL militants through geotag can be of great help in the fight against terrorism.

“No doubt this is a better alternative than being targeted by a drone strike,” said Weyers, adding that the tracking systems “can better justify potential criminal charges against the individuals and at the very least build grounds for their detention and investigation upon their return [to their homelands].”

Taylor first stole the limelight in September after he burned his New Zealand passport and posted the pictures of the act on Facebook.

The ISIL terrorist group, with members from several Western countries including Canada, France, Australia and Germany, controls large swathes of land in Iraq and Syria, and has been carrying out horrific acts of violence such as public decapitations and crucifixions against all communities such as Shias, Sunnis, Kurds, and Christians.