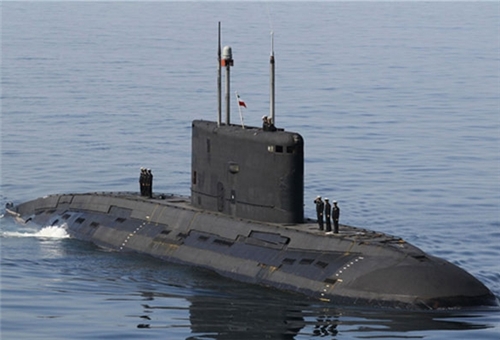 TEHRAN (FNA)- Iran’s home-made Qadir-class submarines successfully fired torpedoes and destroyed the specified targets successfully on the sixth day of the massive drills in waters South of the country.

On the sixth day of Mohammad Rasoulallah (PBUH) maneuvers on Tuesday, the Iranian Navy’s Qadir-class submarines (which are equipped with sonar-evading technology and can fire missiles and torpedoes simultaneously) searched and traced the hypothetical enemies’ submarines using passive sonar radar systems and then fired torpedoes at the specified targets and destroyed them.

Also on the fifth day of the drills on Monday, Iran’s latest home-grown torpedo was fired by the Naval forces’ anti-submarine SH-3D helicopters.

The torpedo successfully hit and destroyed the specified sub-surface target in the waters of the Sea of Oman, Southern Iran.

According to Navy Commander Rear Admiral Habibollah Sayyari, the torpedo, test-fired recently, was used in operation for the first time on Monday.

The torpedo was last month test-fired in Jask region, Southern Iran, and can be fired from submarines, surface vessels and helicopters.

2 anti-subsurface SH-3D helicopters which were delivered to the Navy on December 1 were equipped with the torpedoes.

The military exercises codenamed Mohammad Rasoulallah (PBUH) cover an area of 2.2 million square kilometers from the East of the Strait of Hormuz to the Southern parts of the Gulf of Aden.

The Iranian Navy on Sunday launched its newly-developed mine laying and sweeping system on the fourth day of the wargames underway in the Southern and Southeastern parts of Iran.

On the fourth day of the drills, the Iranian Navy rolled mines in the Sea of Oman and the area where the exercises are staged to prevent hypothetical enemies’ infiltration into the territorial waters.

After rolling the mines, the Iranian Naval forces defused them using minesweeping RH helicopters to provide security for the cargo ships and oil tankers and keeping the shipping lines open.

The Navy’s new integrated mine laying and sweeper system was then unveiled in a ceremony participated by Rear Admiral Sayyari.

Iran is among the few world countries with advanced minesweeping capabilities.