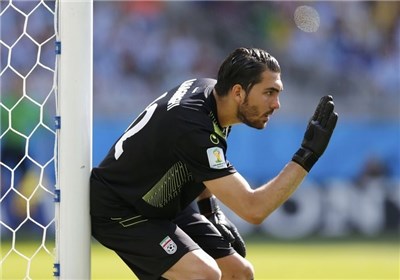 The Iranian football team has been drawn along with Bahrain, Qatar and the UAE in Group C.

Haghighi was a standout for Team Melli at the 2014 World Cup earlier in the year.

He became the first Iranian goalkeeper to keep a clean sheet in a FIFA World Cup, and he amazed audiences against Argentina by keeping them at bay until the 91st minute of the match.

The 26-year-old goalkeeper has represented Iran at every age level, playing at a couple of AFC Youth Championships before being called up by Afshin Ghotbi in 2010, afcasiancup.com wrote.

Haghighi has been a goalkeeper to keep an eye on for some time. He made his debut for Persepolis at just 18 years of age, and incredibly he saved a penalty from the legendary Ali Daei.

It was a statement of the young man’s talent, and less than a decade on great things are expected of him. Haghighi moved abroad in 2012, joining Russian club Rubin Kazan before returning on loan to Persepolis after struggling for game time.

Iranian goalkeepers are not common in Europe, but soon he moved back to sign for Portuguese side Sporting Covilha, where he helped them avoid relegation in 2014.

Still contracted with Rubin Kazan, Haghighi then moved to Penafiel after the World Cup. Ranked as the highest seed in the 2015 AFC Asian Cup, the young goalkeeper will hope to lead Team Melli to their fourth continental title.