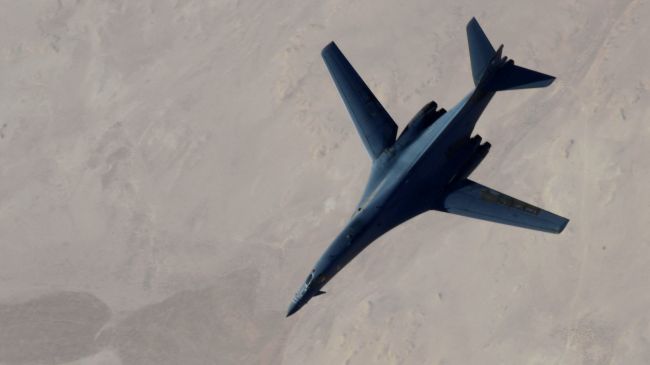 A B-1B Lancer disengages from a KC-135 Stratotanker after refueling following airstrikes in Syria. (File photo)

Jordanian parliament members have warned Amman against any potential military cooperation with the US ground forces in the Middle East.

The lawmakers said that the Jordanian government should refrain from getting involved in the US war against the ISIL terror group in Iraq and Syria.

The call came after some Arab media reports said that the two countries are planning to mobilize their ground forces for battling ISIL militants in Iraq and Syria.

The lawmakers held the United States accountable for the instigation of the crisis in Syria, stressing that Washington ‘must reap what is has sown in the Arab country single-handedly.’

The warning came after the ISIL terror group captured Jordanian pilot Maaz al-Kassasbeh after his aircraft went down during a mission in Syria.

Jordan, Saudi Arabia and the United Arab Emirates are among a number of countries that have joined the US-led aerial bombarding campaign in Syria with air raids being carried out without any authorization from Damascus or a UN mandate since late September. The coalition had already launched air raids against the Takfiri terrorists in Iraq in August.

Most of these countries have been supporting al-Qaeda-linked militant groups fighting the government in Syria.

Syria has been grappling with a deadly crisis since March 2011. The ISIL terrorists, who control large parts of Syria and Iraq, have threatened all communities, including Shias, Sunnis, Kurds, and Christians.