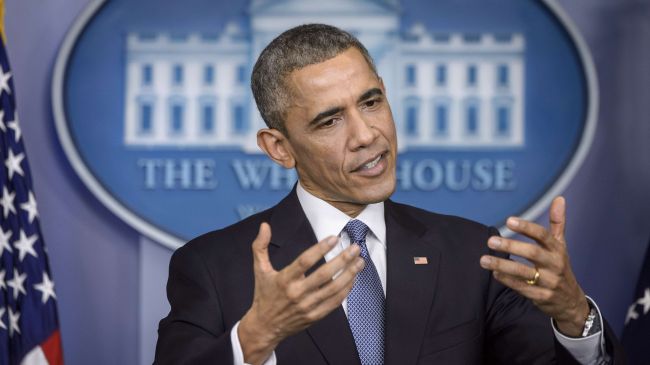 Obama: Iran has ‘chance to get right with the world’ – NPR

Iran could become a “very successful regional power” if Tehran agrees to a long-term deal to curb its nuclear program, President Barack Obama said in an interview with NPR News.

The Navy’s 32nd fleet of warships on Monday rescued an Iranian oil tanker from a pirate attack around the Bab-el-Mandeb Strait as the vessels were patrolling in a nearby waters as part of participating units in Army’s massive wargames underway in southern and southeastern Iran.

Iran’s latest home-grown torpedo was fired by the Naval forces’ anti-submarine SH-3D helicopters on the fifth day of the massive Mohammad Rasoulallah (PBUH) wargames underway in the Southern and Southeastern parts of the country.

A senior Iranian lawmaker rejected the claim that Tehran has exempted Pakistan from fines for Islamabad’s delay in the completion of a long-awaited joint gas pipeline project, saying that Parliament energy commission will study the issue.

The Chief of Staff of the Armed Forces has said December 30th rallies which was a popular reaction to 2009 post-election unrest, revealed the true face of the conspirators.

Major military exercises underway in international waters to the south of Iran are to show the world that the region is safe and secure, Iran’s Navy chief says.

Iraqi Defense Minister Khaled al-Obeidi would arrive in Tehran on Monday to discuss issues of mutual interests as well as regional and international matters with senior Iranian officials.