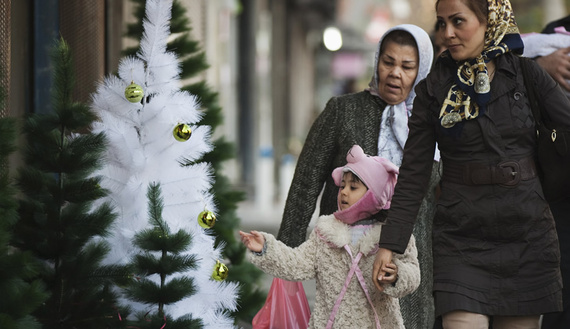 A girl looks at Christmas trees as she and her mother walk past Christmas decorations in central Tehran, Dec. 13, 2011. (photo by REUTERS/Morteza Nikoubazl)

As Christians around the world celebrate Christmas, the holiday season is also observed in Iran, a predominantly Muslim nation where Christians make up less than 1% of the country’s approximate population of 77.5 million.

Christmas trees decorated with red, green and gold gift boxes placed behind shop windows or at the entrances of different shopping malls and hotels can be seen, especially in the Christian neighborhoods of Tehran.

Decorated trees, along with Nativity scenes of the Virgin Mary, Joseph and baby Jesus, can also be seen in shops along Mirza Shirazi Avenue and Ostaad Nejatollahi (Villa Avenue) and its surrounding neighborhoods in central Tehran, where many Iranian Christians reside.

Shermin, an Iranian Christian, told Al-Monitor, “Like other Christians in the world, we celebrate Christmas at home along with our family and friends, exchange gifts and party.” She added, “There are a lot of good things to eat at this joyful time of the year.”

This article was written by Maysam Bizar for Al-monitor on December 29,2014. Maysam Bizar is a freelance journalist and translator in Iran who focuses on Iran’s foreign policy and nuclear program. He has worked for and contributes to various media outlets in Iran . On Twitter: @m_bizar