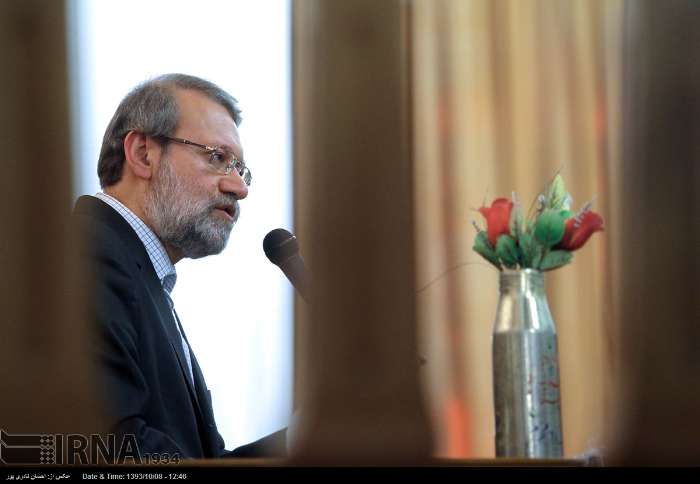 TEHRAN (FNA)- Iranian Parliament Speaker Ali Larijani underlined that the so-called anti-ISIL coalition led by the US has proved futile in fighting the terrorist groups and is just meant to serve as a political gesture.

“The western coalition to fight the ISIL terrorists is merely a political gesture in the world and they don’t do anything in practice,” Larijani said, addressing a ceremony in Tehran on Monday.

He said that the western countries merely pay lip service in fighting terrorism but Iran takes practical steps in this regard, specially by assisting Iraq in its campaign against terrorist groups.

“It was the Islamic Republic of Iran which stopped the advance of the savage terrorists in Iraq and established (relative) peace in that country,” Larijani added.

In relevant remarks earlier this month, Larijani underlined the fake nature of the so-called anti-ISIL coalition, and called for cooperation among the regional states to fight terrorism.

“What is said about war on terrorism, including the fake US-led coalition, are just slogans,” Larijani said in a joint press conference with his Iraqi counterpart Salim al-Jabouri in Tehran.

Stressing that the ground should be paved for all those countries which are determined to participate in the campaign against terrorism, he said, “Determination to fight terrorism will be welcomed everywhere, no matter it is in Iraq or Syria.”

“In our negotiations with the Iraqi speaker, we paid attention to this issue that the region needs security measures and these measures can be adopted through the collective efforts of all countries,” Larijani said.

Also during the press conference, Jabouri underlined the necessity for cooperation between Tehran and Baghdad and Iran’s important role in the regional developments, and said, “The Islamic Republic of Iran has played a significant role in the democratic process and creating stability in Iraq.”