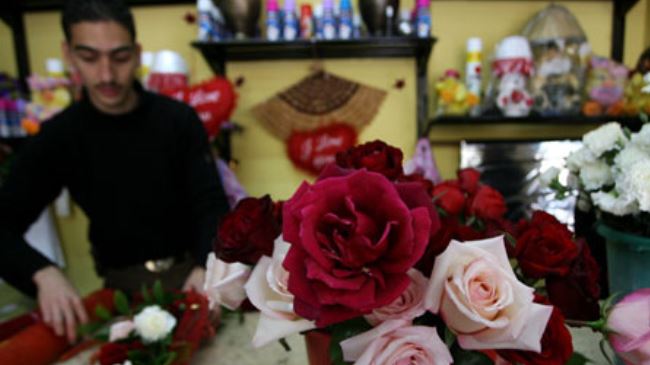 The file photo shows a bunch of flowers in a flower shop in the besieged Gaza Strip.

The flower industry in the besieged Gaza Strip has been experiencing crippling problems, causing a drastic reduction in the number of of flowers produced there, Palestinian sources say.

The ministry further said that the flower industry in the coastal sliver encountered thorny problems after the Netherlands decided to cut its logistic support for the activity there.

According to reports, the flowers cultivated in the blockaded area used to be exported to European countries. However, the flowers produced in the Gaza Strip are now just sent to local markets.

Tahsin al-Saqa, the manager of marketing in the Agriculture Ministry in the Gaza Strip, said that as many as ten million flowers were exported from the area in 2010. He, however, noted that in 2013 the number reduced to two and half a million flowers.

Most of the farmers in the blockaded territory have reportedly turned to the cultivation of vegetables which is seemingly being adversely affected by the latest Israeli onslaught on the territory.

Palestinian farmers are facing huge challenges in order to sell their crops, especially in overseas markets.

“Growing strawberries became hugely expensive after the blockade. The closure of borders makes us suffer as we can’t export products to Europe. This will force us to sell it in the local markets with extremely low prices,” a Palestinian farmer told Press TV.

The Israeli regime has imposed tough policies on Gaza farms, especially those located close to the border lines, which have the most fertile soil in the enclave.
In its latest war on Gaza, Israel started pounding the enclave in early July, inflicting heavy losses on the Palestinian land. Almost 2,140 Palestinians, mostly civilians, were killed in the Israeli onslaught. Around 11,000 others were injured.

The Israeli war ended on August 26 with an Egyptian-brokered truce, which took effect after negotiations in the Egyptian capital, Cairo. The deal stipulates the ease of Israel’s seven-year-old blockade as well as the provision of a guarantee that Palestinian demands will be met.