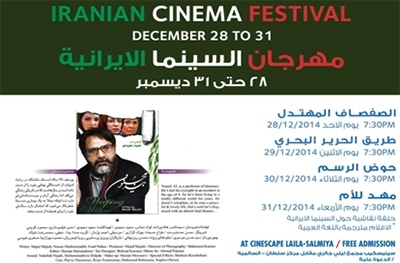 Tehran, Dec 27, IRNA – Iran’s cinematic festival will kick off in Kuwait on Dec. 28 and run for four days.

The festival, which will be held in Kuwait’s Laila Gallery artistic complex, aims to promote Iranian art and culture in the country. The event will be held by Iran’s cultural attaché office in Kuwait.

It will screen a number of films which were chosen in international film festivals. ‘The Willow Tree’ (Bide Majnoon) by Iranian director Majid Majidi will open the event, the Islamic Culture and Relations Organization reported.

The film is about a blind man who is presented with an opportunity to regain his sight after over 40 years of total blindness.

On the following day, Iranian history-drama feature film ‘Maritime Silk Road’, directed by Mohammad Reza Bozorgnia, will be screened. The flick was awarded at the 2014 International Historical and Military Film Festival in Warsaw, Poland.

The movie follows the adventures of the first sailor Soleiman Siraf who crossed the Indian Ocean to China through what later became to be known as the Maritime Silk Road.

On the 3rd and 4th day ‘The Painting Pool’ directed by Maziar Miri and ‘A Cradle for Mother’ by Panah Bar Khoda Rezae’i are planned to be screened.

‘The Painting Pool’ narrates a story about a mentally retarded couple and their problems in the society of Iran.

The film has been screened at several international events and has bagged many awards inducing the UNESCO prize at the seventh Asia Pacific Screen Awards (APSA).

‘A Cradle for Mother’ screens the life of a seminary girl student who is headed to Moscow to promote religion but her mother’s illness placed her in a dilemma.