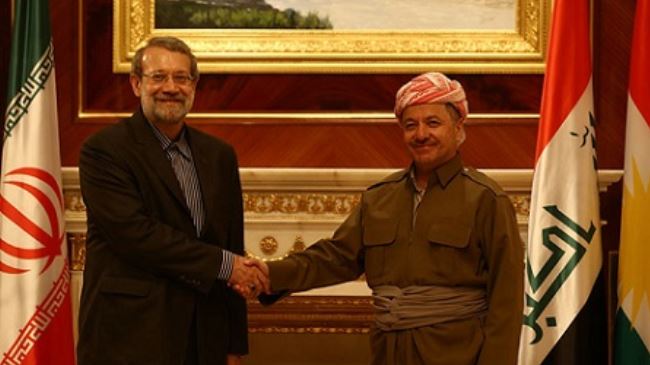 The president of Iraq’s Kurdistan Regional Government has hailed Iran’s constant support for the Iraqi government and people in their fight against terrorist groups.

“Iran stood by the Iraqi government and nation in a difficult situation when the ISIL terrorist group was threatening (the capital of Iraqi Kurdistan region) Erbil and (the Iraqi capital) Baghdad, and this measure is worthy of appreciation,” Masoud Barzani said in a meeting with Iran’s Parliament (Majlis) Speaker Ali Larijani in Erbil on Friday.

Referring to numerous commonalities between the Kurdish region and Iran, Barzani stated that the two sides have good relations, which will be expanded in the future.

Larijani, for his part, described the current situation in the Middle East as sensitive and serious, calling on all regional governments to “feel responsible” in this regard.

Larijani, who arrived in Iraq early on Tuesday on the last leg of a regional three-country tour, also met with some other top officials, including Iraqi Prime Minister Haider al-Abadi, former Iraqi Parliament Speaker Mahmoud al-Mashhadani, and Deputy Leader of the Patriotic Union of Kurdistan Barham Salih.

The ISIL terrorist group controls some parts of Syria and Iraq. The Takfiris have engaged in crimes against humanity in the areas under their control. The militants have mass murdered local civilians, captured army and security officers and terrorized people from diverse communities, including Shias, Sunnis, Kurds, and Christians.