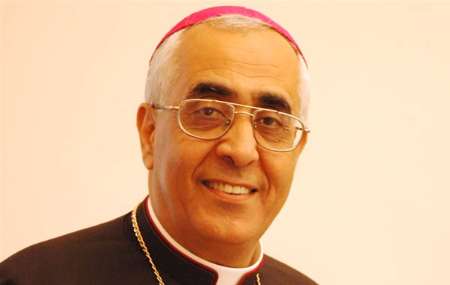 According to the IRNA correspondent in Lebanon, Archbishop Maroun Lahham, the Latin Patriarchate of Jerusalem’s Patriarchal Vicar in Jordan made the comment in a meeting with the Iranian Ambassador to Jordan Mojtaba Ferdowsipour, held in Amman, on the birth anniversary of Jesus Christ (P).

“Iran’s advancements under full sanctions’ period, especially in scientific and technological fields, and its peaceful nuclear program, are eye catching and pride inspiring for the regional nations,” said the Archdiocese.

He meanwhile praised the Iranian diplomacy in managing the regional and international crises sagaciously, depicted from the delicate and artistic designs of the Iranian artists who weave the knots on the strings of the beautiful Iranian hand woven carpets as a unique art in the world.

The Latin Archbishop of Jordan prayed for the advancement and development of Iran, and especially for Tehran’s strengthening of its relations with the Arab world, including Jordan and expressed enthusiasm for an official visit of Iran, wherever the conditions for such a visit will be arranged.

Ambassador Fredowsipour, too, in the meeting congratulated the auspicious birth anniversary of Jesus Christ (P) the Messiah, and the beginning of the Christian New Year to the Latin Archbishop of Jordan and the world Christians, especially in his field of service, Jordan, Palestine, and Cyprus.

He emphasized the significance of defending Palestine and the Islamic and Christian sanctities in occupied Jerusalem (Holy Qods) for the Leader of the Islamic Revolution and the high ranking Iranian officials, considering the condition of the Christians in Iraq and Syria, and especially their brutal massacre and forced migration by the faithless ISIS terrorists as extremely worrying.

“The Islamic Republic of Iran is ready to assist the Iraqi and Syrian Christians to decrease their pains and sufferings,” added Ferdowsipour.