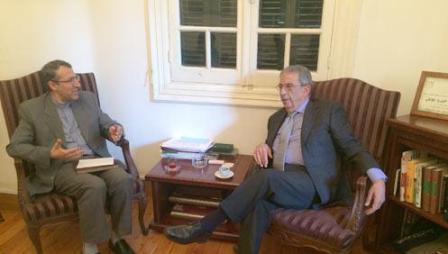 Regional problems will not be solved without Iran: Amr Mousa

Tehran, Dec 24, IRNA – Former Secretary-General of the Arab League Amr Mousa on Wednesday hailed Iran’s major role in the regional and international issues, saying that regional problems will not be solved without Iran.

He made the remarks in a meeting with the head of Iran Interest Section in Cairo, Mohammad Mahmoudian.

Referring to challenges facing the region including the ugly phenomenon of terrorism, Mousa stressed the need for promoting cooperation among Muslim states, Iran and Egypt in particular, to help resolve the region crises.

Regional issues are solvable in the framework of cooperation and regional consensus, he said.

Underlining Egypt’s support for Iran’s peaceful use of nuclear energy, Amr Mousa reiterated that Iran and Egypt have common stance over freeing the Middle East from weapons of mass destruction.

Mahmoudian, for his part, said that Iran respects the Egyptian nation’s votes and is willing to develop sustainable ties based on mutual respect and non-interference in others’ affairs.

Pointing to close stances of the two countries regarding many regional developments, he described Iran and Egypt as regional partners, stressing the need for continuous cooperation between the two countries’ officials for solving crises through diplomatic means.