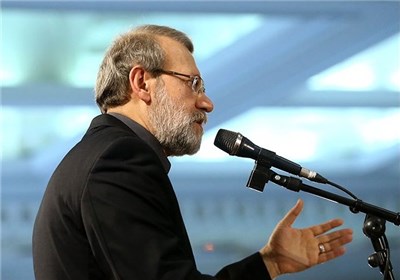 TEHRAN (Tasnim) – Iranian Parliament Speaker Ali Larijani hailed Lebanon as the front-runner of the anti-Israeli resistance movement across the region, saying the Lebanese provided inspiration for the other Muslim nations after a heroic resistance to the Tel Aviv regime’s military offensives.

“This is a great advantage for the Lebanese people to bear the flag of resistance and to have demonstrated a new approach in the Islamic world,” Larijani said in an address to the Lebanese International University in Beirut on Monday.

Praising Lebanon for its resistance in the Israeli 33-day war in summer 2006, Larijani said the Islamic countries had been reeling from a “sense of frustration” for years when the Lebanese nation awakened them.

“This is a great glory for the people of that country,” the speaker said of Lebanon’s battle against the Israeli regime.

The 33-Day War, also called the 2006 Israel-Hezbollah War and known in Lebanon as the July War, was a military conflict in Lebanon, northern Israel and the Golan Heights.

It started in July 2006, and continued until a UN-brokered ceasefire went into effect in August 2006, though it formally ended on 8 September 2006 when Israel lifted its naval blockade of Lebanon.