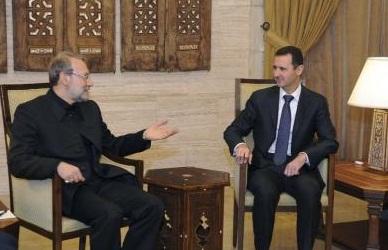 Visiting Larijani earlier in a meeting with his Syrian counterpart, Mohammad Jihad al-Laham, said Syrians have passed behind the problems and now they can protect their accomplishments.

Larijani who arrived in Damascus on the first leg of his regional tour told reporters upon arrival in Damascus International Airport that Iran will support any diplomatic solution to stop terrorist massacre in Syria.

He is slated to confer with Prime Minister Vael al-Halqi during his stay in Damascus.

Larijani’s regional tour will also take him to Lebanon and Iraq after the end of the Damascus visit.

The speaker is accompanied by a high-ranking delegation comprised by Foreign Ministry officials and parliamentarians.