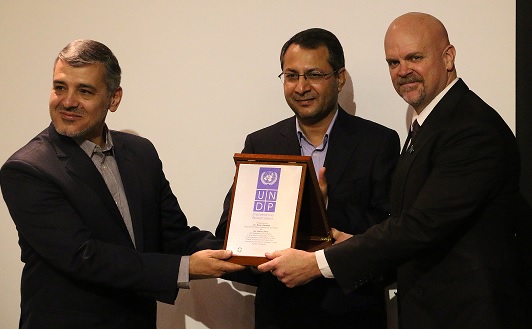 “By lending its support, Dana Insurance has demonstrated the immense value of Corporate Social Responsibility to the development agend” said Mr. Lewis (Right)

The partnership between Dana Insurance Company and the Conservation of the Asiatic Cheetah Project (CACP) is a perfect example of the positive results that can be achieved when the public and private sectors join forces in pursuit of a common goal.  Such cooperation underlines the essence of partnership-building which is required for future sustainable development.

The Conservation of the Asiatic Cheetah is a key project between the Iranian Department of Environment, UNDP and a number of committed national and international partners.  One of the most significant components of the project inarguably is the role played by Game Guards in helping to protect this majestic animal.
Recognizing the important contribution of these dedicated men, Dana Insurance has provided insurance coverage to 126 game guards and their families.  This coverage comprises complementary, personal responsibility and group insurance for the game guards as well as fire Insurance coverage for 26 game guard stations across the vast cheetah territories in Iran.  The company has also provided unlimited insurance coverage for livestock predation to herders whose livestock are preyed upon by the cheetahs when operating in their natural habitats.

The 30th National Conference of Senior Managers of Dana Insurance Company was held on 11 December at Simorgh Hotel.  The event acknowledged Dana managers, and also provided an opportunity to recognize and celebrate the partnership between Dana Insurance and the CACP.
The UN Resident Coordinator and UNDP Resident Representative, Mr. Gary Lewis, was invited to speak at the event, where he presented a plaque of appreciation to Dr. Bijan Sadegh, CEO and Vice-Chairman of Dana Insurance, in the presence of Dr. Ahmad Ali Keykhah, Deputy Head Natural Environment and Biodiversity of the Department of Environment, Mr. Murali, UNDP Deputy Resident Representative, and the manager and staff of CACP.

In his remarks, Mr. Lewis thanked Dana Insurance Company for their generosity in providing financial – and social – security for those who operate at the sharp end, in extreme weather conditions and often facing severe dangers.  He continued by emphasizing the collective impact of Dana’s contribution in raising morale among the Asiatic Cheetah Game Guards.
By lending its support, Dana Insurance has demonstrated the immense value of Corporate Social Responsibility to the development agenda, said Mr. Lewis.

Local residents hope that continued high precipitation will continue to aid the tireless national and international efforts to save this source of natural beauty.