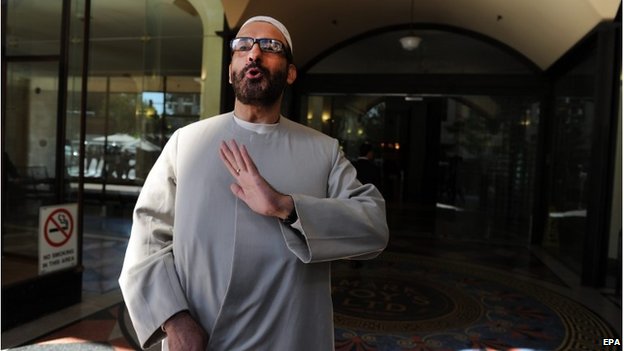 Sydney gunman was ‘wanted in Iran’

Iran says it requested 14 years ago the extradition of Man Haron Monis – the gunman behind the Sydney siege – but Australia refused to hand him over.

The head of Iran’s police, Gen Ismail Ahmadi Moghaddam, told reporters that Monis was wanted for fraud at the time.

He said Monis had fled to Australia via Malaysia in the late 1990s.

Monis and two hostages were shot dead on Tuesday morning, when commandos stormed the Sydney cafe where he had been holding captives for 16 hours.

Gen Moghaddam said Monis was known in Iran as “Manteqi”.

“In 1996, he was the manager of a travel agency and committed fraud,” the general told reporters. “He then fled to Malaysia and from there, to Australia under a fake name.”

He added that “since we did not have an agreement on the extradition of criminals with Australia, the Australian police refused to extradite him”.

Australian PM Tony Abbott: “We do have to ask ourselves the question – could it have been prevented?”

Monis applied for political asylum to obtain refugee status in Australia, Gen Moghaddam said, describing the incident as “a play”.

Meanwhile the Australian government has announced it is investigating why Monis was released on bail on separate charges.

He had a history of religiously inspired activism, but officials say there is as yet no evidence his actions were linked to international Islamist movements.

In 2009 he was convicted of sending offensive letters to the families of fallen Australian soldiers.

In 2013, he was charged with being an accessory to the murder of his ex-wife, and given bail.

He also faced more than 40 sexual and indecent assault charges.

Monis had “vehemently denied” the assault and accessory to murder charges, his former lawyer told the BBC.

How the 16-hour Sydney siege unfolded