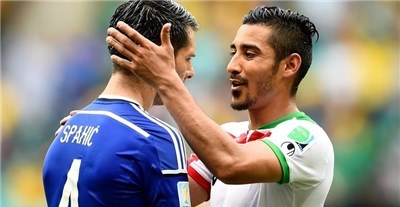 Team Melli is currently holding a camp in South Africa to prepare itself for the 2015 AFC Asian Cup, which will be held in Australia from January 9 to 31.

Iran has been pitted against the United Arab Emirates (UAE), Qatar and Bahrain in Group C of the tournament.

“Our first match in the AFC Asian Cup is against Bahrain. This is our first final in the competition. To reach the main final, we have to defeat so many teams. We’ll be looking at every game as if it is a final,” Gucci told the Tasnim News Agency.

Asked about how he feels about scoring in the final, Ghoochannejhad said, “If I make history, it will be the sweetest experience in my life.”

“I love scoring but it doesn’t matter who scores, the most important thing is to win,” Al-Kuwait striker added.

“All the Iranian fans have high expectations after our good performance in the 2014 World Cup. We have to keep working in Australia and I believe that we could win the title since we have the good players and a great coach. All the Iranian players love Carlos Queiroz since he is a professional coach,” Gucci concluded.