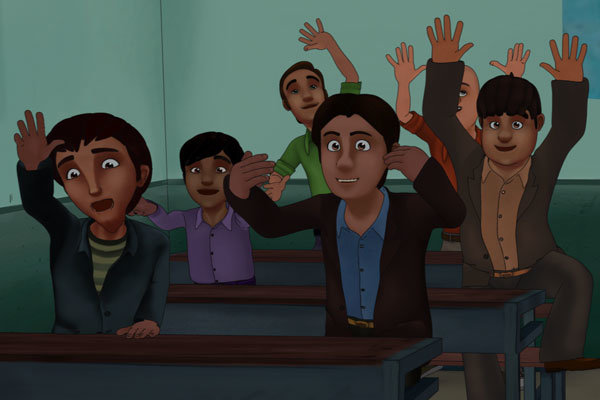 ‘Children of the Sun’ narrates history of revolution

TEHRAN, Dec. 15 (MNA) – The director of ‘Children of the Sun’ has said the animated series accounts the history of the decade of the Revolution.

Ali Ahmadi, who co-directed the animation series, said that the series would be found popular with children and adolescent people, with which they would easily identify; “the first season of the animated series had been aired on Iran’s state TV; the characters are very familiar with the children of today as well as those of the past; they reflect some dimensions of the personality of the audience,” Ahmadi added. “The characters are common people we see frequently in society, and even we are part of the cast by character traits,” he said.

Ahmadi also said that the visual effect of the animation had been an attempt to give the audience a probable plot which is at the same time ‘attractive.’ “Also, the story has its own special pace in narration,” said the co-director of the series.

He said that Eshraq Cultural Institute cooperated in production of the series, which was our first ever cooperation; “the sheer speed of cooperation was surprising, which we think that it was for the fact that all participants were professionals; responsibilities were divided and well understood by individual participants; there was a very exemplary coordination among different parts including software, directing and rendering of the animation,” Ahmadi rejoiced to say.

“The atmosphere was very conducive to the final result of the cooperation; and provided enough momentum to the project,” the co-director said. “The animation accounts the story of the Revolution; Children of the Sun takes as its main theme the real stories and event from the history of the 1970s; the animated nature and children audience entail a generic and dramatic peculiarities well suited to its audience,” he asserted.

“The story extends to include very recent stories as the Sacred Defense and Iran’s students successes in international scientific Olympiads and robotics events,” said Ali Ahmadi, which co-directed the animation series with Masoud Hamze’ei and in close collaboration with Saba Animation Center and Revayat (narrative) Foundation. It will be aired on Iran’s state TV Channel Two every day 15:30 PM.