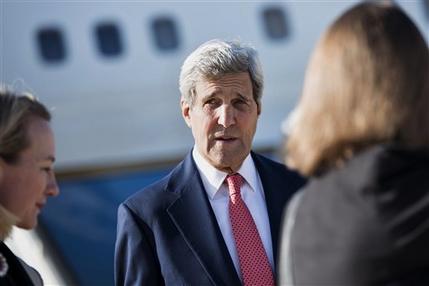 Washington (AFP) – US Secretary of State John Kerry left early Sunday for a series of meetings in Europe seeking to head off an end-of-year UN showdown over a Palestinian bid for statehood.

His first stop was to be Rome where he will meet separately with both Russian Foreign Minister Sergei Lavrov and Israeli Prime Minister Benjamin Netanyahu.

Diplomats say negotiations on a UN resolution to revive Israeli-Palestinian peace prospects are making little headway, with Europeans waiting for a US response to proposals.

Jordan last month circulated a draft Palestinian text to the Security Council setting November 2016 as a deadline for the end of the Israeli occupation.

But the text ran into opposition from the United States, which has veto power, and other countries that felt it lacked balance, diplomats said. It was never put to a vote.

France stepped in last month to try to cobble together along with Britain and Germany a resolution that would win consensus at the 15-member council.

And the Palestinians have said they would like a draft resolution to go to a vote before the end of the year.

The text would call for a return to negotiations with a view to achieving a two-state solution by which Israel and a Palestinian state would co-exist.

Negotiations have hit hurdles over whether to include a two-year deadline for talks on a final settlement to be completed.

France is also proposing to host an international conference to launch the new peace track.

Kerry met Thursday with his French counterpart Laurent Fabius on the sidelines of climate talks in Lima, to discuss the tensions in the Middle East.

Supporters of a UN resolution are now hoping to win US backing or at least ensure Washington will not oppose the measure — which would be the first text adopted by the council on the Israeli-Palestinian conflict since 2009.

“There is a window of opportunity,” said a European diplomat. “There is a willingness from the Americans to consider options at the UN.”

Kerry led dogged efforts earlier this year to try to reach an Israeli Palestinian peace deal, but the bid collapsed amid bitter recriminations by both sides.

Relations between the US and Israel have been uneasy since, amid a series of spats and behind-the-scenes name-calling.

Kerry is due to meet Lavrov on Sunday, shortly after arriving in Rome. Talks with Netanyahu follow on Monday, after which the top US diplomat is expected to travel on within Europe although no stops have yet been announced.

Russia responded angrily on Saturday to news that US senators had passed a bill calling for fresh sanctions against Moscow and the supply of lethal military aid to Ukraine.

The eight-month conflict in Ukraine between government forces and pro-Russian separatists has left at least 4,634 dead and 10,243 wounded, while displacing more than 1.1 million people, according to the United Nations.

Deputy Russian foreign minister Sergei Ryabkov said however the main focus of the Rome meeting — the 17th between the two diplomats this year — would be the Middle East.

The talks come as European parliaments in Britain, France, Spain, Ireland and Portugal have asked their governments to recognize Palestinian statehood — a move that would bypass negotiations.

And the campaign for snap Israeli elections in March is also complicating the regional political landscape.

“There are a lot of different folks pushing in different directions out there, and the question is can we all pull in the same direction,” Kerry said Friday, when asked about his meeting with Netanyahu.

“We’re trying to figure out a way to help defuse the tensions and reduce the potential for more conflict, and we’re exploring various possibilities to that end.”