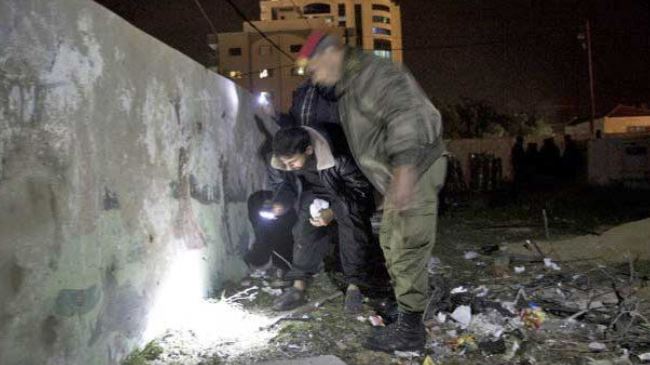 Palestinian police inspect a damaged wall of the French Cultural Centre in Gaza City after an explosion on December 12, 2014.

Palestinian resistance movement Hamas has condemned an explosion that targeted the French Cultural Center in the Gaza Strip on Friday.

Senior Hamas official Ahmed Yousef denounced the raid on Saturday, stressing that such a move does not serve the Palestinian cause.

Yousef also questioned the timing of the assault which comes at a time when the French parliament is calling on the country’s government to recognize an independent state of Palestine.

“Why at this specific time at which France has a generous stand toward Palestine?” he said.

Meanwhile, the Palestinian Ministry of Foreign Affairs also condemned the incident, in a statement issued on Saturday, saying that “the side responsible for such a criminal action does not belong to Palestinians as culture is a major part of the Palestinian identity.”

Those responsible for the explosion “do not appreciate the role of culture in the Palestinian national fight,” the ministry added.

It also underlined that the target of the raid was the recent strong position by France regarding Palestine.

A Palestinian policeman was wounded in the Friday explosion, the cause of which is unclear, in the western part of Gaza City.

Police, explosives engineering and criminal investigation experts rushed to the scene of the blast and opened a probe into the incident, Gaza police spokesman Ayman al-Batneiji said.