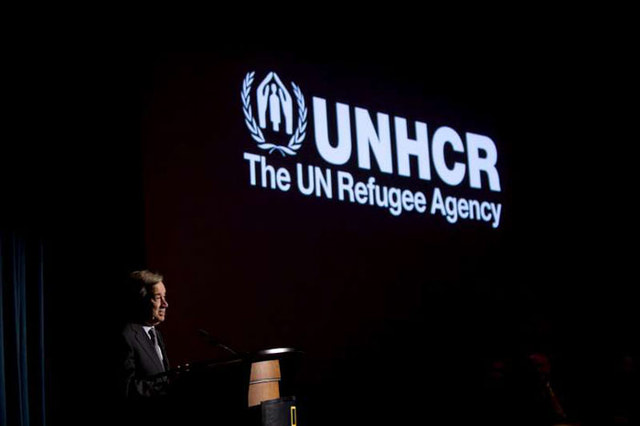 TEHRAN, Dec. 10 (MNA) – Faced with multiple large-scale emergencies in the Middle East and Africa, the United Nations High Commissioner for Refugees yesterday warned donors at the agency’s annual pledging conference that the world’s humanitarian financing system was “close to bankruptcy.”

“More people are fleeing war, violence and persecution than ever before. Emergencies in Syria, the Central African Republic and South Sudan are turning into protracted displacement situations,” said António Guterres, as he presented total financial requirements for 2015 of $6.23bn, larger than any previous budget.

While last year’s conference saw $671.6mn promised by donors, this year’s figure was down by over a quarter, with $500.8mn in pledges tabled. Though the figure promised during the conference does not cover all the agency’s needs, pledges are important as they give the organization a vital funding indication, allowing it to plan and continue operations to help the almost 43 million forcibly displaced or stateless people worldwide.

“We need additional and more predictable ways of funding these emergencies,” said Mr. Guterres, warning that the gap between needs and available humanitarian funding was widening in the face of a population forcibly displaced people that had doubled over the last five years.

UNHCR’s financial needs have more than doubled in the previous five years but the agency receives only a small annual contribution from the UN regular budget. Its programs are almost entirely funded by voluntary contributions from Government and private donors.

Over 2014, the $3.19bn in contributions that UNHCR has received is less than half the amount needed, although the organization can cover the most basic needs such as water, sanitation, health and rudimentary shelter, important long-term activities such as vocational skills training, promoting livelihood activities or secondary education remain often underfunded.