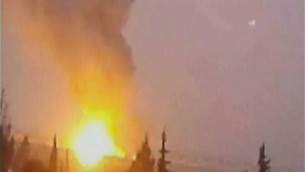 Syria calls for U.N. sanctions on Israel over air strikes

A picture said to show a fireball after Israeli strike on sites inside Syria on December 7, 2014. (Screen capture: Channel 2)

(Reuters) – Syria asked the United Nations Security Council on Monday to impose sanctions on neighboring Israel, a day after accusing the Jewish state of bombing areas near Damascus international airport and in the town of Dimas, near the border with Lebanon.

Israel has struck Syria several times since the start of the three-year conflict, mostly destroying weaponry such as missiles that Israeli officials said were destined for their long-time foe Hezbollah in Lebanon.

In a letter to U.N. Secretary-General Ban Ki-moon and Chad, Security Council president for December, Syria said that “such aggressions will not stop it from fighting terrorism in all its forms and manifestation across the entire territory of Syria.”

“At the same time, the Syrian Arab Republic calls on the international community and the Security Council to shoulder their responsibility and forcefully condemn this brutal attack and to cease covering it up under any pretext,” the letter read.

“Syria also calls for the imposition of stern sanctions against Israel … and requests that all measures prescribed under the Charter of the United Nations should be taken to prevent Israel from again committing such aggressions,” it said.

Israel has avoided taking sides in Syria’s civil war and does not publicly confirm bombing missions, a policy it sees as aimed at avoiding provoking reprisals.

Syria also accused Israel of carrying out the air strikes to “cover up internal Israeli divisions and draw attention away from the collapse of the Israeli coalition Government and Israel’s extreme policies, particularly its continued occupation of Arab territory.”

A U.S.-led coalition is also bombing in Syria to target the Islamic State militant group, one of Syrian President Bashar al-Assad’s biggest foes.

Syria’s war started with a pro-democracy movement which grew into an armed uprising and has inflamed regional confrontations. Some 200,000 people have died, the United Nations said.