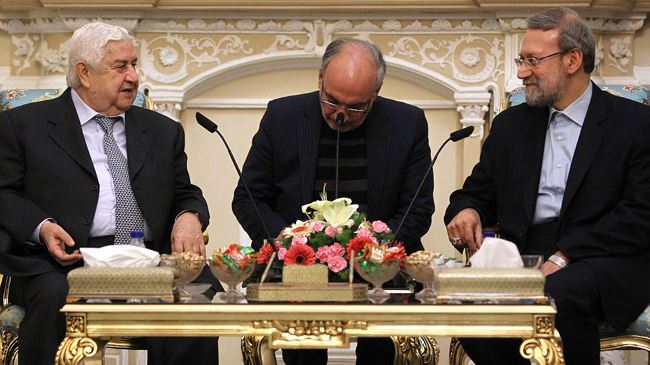 “The continuation of this process will lead to the victory of the Syrian people in the fight against terrorists and their foreign sponsors,” Larijani said at a meeting with Syrian Foreign Minister Walid Muallem in Tehran on Monday, adding that Syria’s resistance is “praiseworthy.”

The senior Iranian official also referred to inhumane crimes committed by Takfiri groups especially the ISIL, saying, “The only way to clear the region form the scourge of” the terrorist groups is to “fight and counter them firmly“  and to avoid resorting to “tactical” methods and “propaganda” techniques.

“The solution to Syria’s problem is political and only possible through diplomatic means,” Larijani added.

The Syrian official, for his part, acknowledged that Iran has spared no support for the Syrian people.

Through its correct and principled positions, the Islamic Republic of Iran has helped the Syrian people to counter terrorists, Muallem said.

“Foreign terrorists under the aegis of the Zionist regime of Israel and some regional and trans-regional states have targeted Syria’s historical existence and identity and intend to disrupt the stability of the entire region,” the Syrian foreign minister noted, referring to the latest Israeli airstrike on Syria.