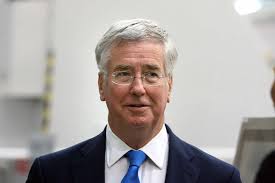 Britain has signed an agreement in Bahrain to expand and consolidate its long-term naval presence in the Persian Gulf region despite the Manama regime’s ongoing crackdown on public dissent.

The pact will give Britain the go-ahead to reinforce its onshore facilities at the Mina Salman Port in Bahrain, where the UK permanently stations four mine-hunter warships, British Defense Secretary Michael Fallon said on Friday.

“This new base is a permanent expansion of the Royal Navy’s footprint and will enable Britain to send more and larger ships to reinforce stability in the [Persian] Gulf,” Fallon said.

“We will now be based again in the [Persian] Gulf for the long term,” he added.

The base, which provides support for British destroyers and frigates in the Persian Gulf, will now be expanded to include a new forward operating base and a place to plan, store equipment for naval operations and accommodate Royal Navy personnel.

Bahrain’s Foreign Minister Sheikh Khalid said the new base is part of a deal with the United Kingdom to maintain regional security and stability in the face of challenging circumstances and noted that Manama is looking forward to the early implementation of this agreement.

The Bahraini regime is also a part of the so-called US-led coalition to launch airstrikes against the ISIL in Iraq and Syria.

The Arab sheikhdom, which has been witnessing bloody anti-regime protests since 2011, also hosts the Fifth Fleet of the US Navy. The base provides protection to the Bahraini royal family and also ensures the US dominance in the oil-rich region.

Thousands of anti-regime protesters have held numerous demonstrations in the streets of Bahrain, calling for the Al Khalifa royal family to relinquish power.

Many Bahrainis have been tortured or killed and hundreds more injured and arrested in the regime’s ongoing crackdown on peaceful demonstrations.

In October, Bahraini Prince Nasser bin Hamad Al Khalifa, who is accused of involvement in torturing protesters in his home country, travelled to London to visit a Royal British Navy transport dock and appeared at the 2014 British Invention Show.

Manama also continues to receive military support on the ground form Saudi Arabia and some other Arab monarchies of the Persian Gulf region.

On March 14, 2011, troops from Saudi Arabia and the United Arab Emirates were deployed to Bahrain to assist the Al Khalifa regime in its crackdown on peaceful protests in the country.