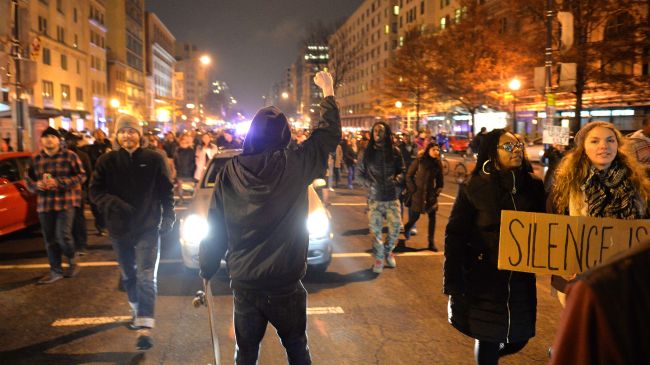 The United States is being rocked by growing protests against the recent decisions by grand juries not to charge police officers who have killed African Americans.

Angry protesters took to the streets in Washington DC, Boston, Chicago, Cleveland, New York, Miami, New Orleans and other major cities to demand justice for the victims of “police brutality” on Friday night.

Anti-racism demonstrations have been held in several US cities over the past few days. More than 200 protesters were arrested on Thursday in New York City. Arrests were also reported in Dallas and Massachusetts.

Meanwhile, the UN Special Rapporteur on minority issues on Friday called on the United States to end the racial profiling of African Americans.

Rita Izask said the grand jury decisions leave many Americans with legitimate concerns. She stated that the concerns relate to a pattern of impunity when the victims of excessive force come from African American or other minority communities.

Unlike the fatal shooting of Brown, the chokehold death of Garner, a father of six and grandfather of two, was recorded on videos that have been widely seen and have contributed to the public outrage. In the video, Garner repeatedly told police officers “I can’t breathe! I can’t breathe!”

US police shoot and kill an average of 1,000 people a year, 1 in 4 of whom unarmed, according to a report by the Police Policy Studies Council.

Based on a recent study by the Malcolm X Grassroots Movement, 313 black people were killed in 2012 by police officers, private security guards and members of the public and in most cases, the perpetrator was not indicted.