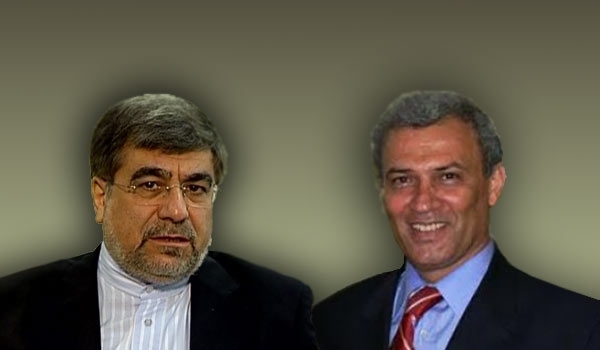 In a meeting with Abu Amr in Tehran on Tuesday, Jannati noted that Iran is ready for expansion of all-out ties with Palestine in all fields particularly in the areas of culture and media.

Palestine is the major issue of Islam at the present time, he added.

Condemning new Zionist regime’s pressures upon Palestinians, the Iranian culture minister asked Muslim states to be united in support of Palestinians against Israel.

Palestinian culture minister, for his part, praised Iran’s support for the Palestinian nation.

He urged Muslim nations to increase their solidarity in support of the holy Quds.

He further voiced satisfaction with the amicable ties between the two nations.

Last week, the Iranian Foreign Ministry, on the occasion of November 29, the World Day of Solidarity with the Palestinian People, voiced Tehran’s full support for the oppressed people of Palestine that have been under Israeli troops’ occupation in the last 65 years. In a statement, the Foreign Ministry said that occupation of Palestine and organized and constant inhuman crimes of the Zionist regime against inhabitants of the holy land is the source of creation and continuation of one of the longest world crises.

According to the Foreign Ministry Media Department on Saturday, the statement continued that these acts of the Zionist regime are not only the roots of many problems and crises in the Middle East and Islamic world, but one of the main sources of insecurity and instability in the world.

The ministry underlined again Iran’s all-out support for the human and liberating ideals of oppressed people of Palestine.

The statement continued Iran respects Palestinians’ admirable and legitimate resistance against invasion and occupation of the Zionist regime and calls on world community to pay attention to the main roots of continuation of Palestine crisis and ways to solve it.

It said there is no solution to end the big human tragedy except through ending occupation in order to restore inalienable rights of Palestinians to determine their own fate and return of all refugees to their motherland.

The statement also condemned recent acts of the Zionist regime in demolishing historical identity of the holy Quds and insulting Al-Aqsa Mosque and warned that continuation of invading policies of the regime would cause strengthening radicalism and emergence of bigger crises in the region and the world.

It also expressed sympathy with besieged people of Gaza Strip and called on Islamic countries and world community to perform urgent and unconditional acts to end the cruel blockade.

The UN General Assembly on December 2, 1997 issued a resolution naming November 29 as the International Solidarity Day with the Palestinian Nation.

The day is commemorated every year in UN New York Headquarters and the other UN offices around the globe, including Vienna.