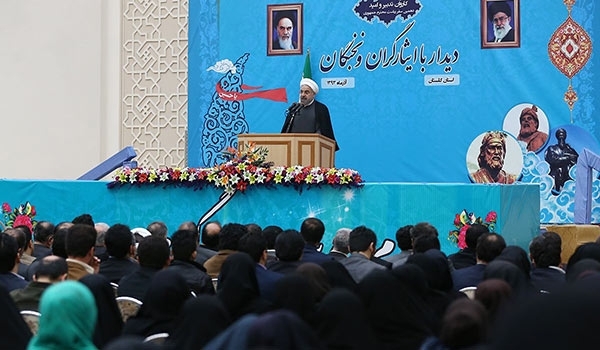 TEHRAN (FNA)- Iranian President Hassan Rouhani underlined that the Iranian nation will not give up even an iota of its inalienable rights and the national interests no matter what happens.

“Today like before we will continue our resistance on the path of the country’s national interests and goals as well as our religion,” President Rouhani said in a meeting with a group of elites and war veterans in Golestan province, Northern Iran, on Tuesday.

The Iranian president reiterated that resistance will help the nation to embrace victory in all areas and achieve its goals.

Earlier today, President Rouhani who is in Golestan province to inaugurate the joint railway of Iran, Turkmenistan and Kazakhstan told a large crowd of people that Iran will reach a final deal with the West over its nuclear program as the country is moving on the path of constructive interaction with the world.