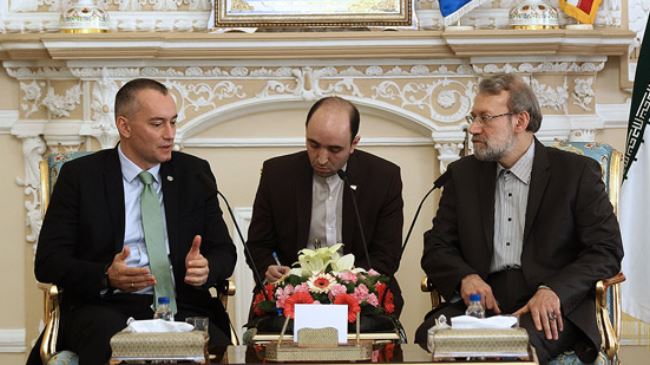 Iran’s Parliament (Majlis) Speaker Ali Larijani has underscored the need for a political plan in any campaign against ISIL Takfiri terrorists.

At a Monday meeting with UN special envoy to Iraq Nikolay Mladenov, in Tehran, Larijani pointed to the US-led so-called coalition formed to fight against ISIL in Iraq and Syria and noted, “In the absence of a definite political plan against ISIL, military operations and airstrikes will not help establish security in Iraq and, in practice, will strengthen the terrorist group.”

Larijani pointed to economic and social problems as key elements leading to insecurity in Iraq, saying, “Eradication of poverty and unemployment and participation of all Iraqi political factions in the country’s new government can contribute to security and progress in Iraq and the UN shoulders a heavy and difficult responsibility in this respect.”

He warned against the spillover of the Iraqi crisis to the entire Middle East and reaffirmed Iran’s determination to devote every effort to help restore calm to Iraq.

Mladenov, for his part, praised Iran’s assistance to the Iraqi nation and government in different areas, particularly against the backdrop of the recent developments in the country, and stressed that Tehran’s measures have always been aimed at creating stability in Iraq and resolving the economic problems of Iraqi people.

The extremist group has threatened all communities, including Shias, Sunnis, Kurds and Christians, during its advances in the violence-torn state.