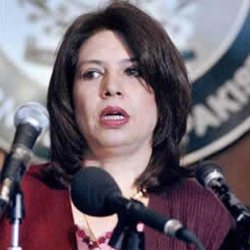 Spokeswoman of Pakistan’s Ministry of Foreign Affairs Tasneem Aslam added that like other countries, Pakistan is also interested in witnessing a comprehensive deal inked by Iran and the Group 5+1 (US, Britain, Russia, France and China plus Germany).

She made the remarks while speaking at her weekly press conference.

The 10th round of nuclear talks between Iran and the Group 5+1 ended in Vienna, Austria, on November 24 after seven days of intensive talks.

As the negotiating parties failed to achieve a comprehensive agreement, they unanimously decided to extend the deadline for another seven months, until July 1, 2015.

They also said that the nuclear talks made significant progress in Vienna.

They also extended application of the Geneva Accord signed on November 24, 2013 which envisaged formula to unfreeze the Iranian assets at foreign banks according to which Iran will receive $700 million every month from oil-export revenue held based on US anti-Iran sanctions.

It was also agreed that US will continue to suspend sanctions on Iran’s auto and petrochemicals exports, while retaining the congressional sanctions that have severed Iran’s access to banking and cut its oil exports in half.