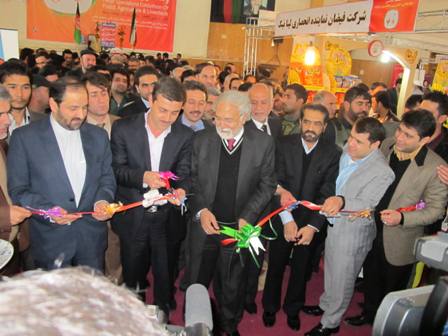 Iran’s general consul in Herat city Mahmoud Afkhami said that people of Iran and Afghanistan have turned into members of a big historical and cultural family, adding that no other two nations in the world have this amount of cultural, historical ties and religious and language commonalities.

He continued that the two countries are facing a new situation, which needs more serious intention in the public and private sectors.

Afkhami said that holding exhibitions can help maintain peace, stability, investment, and employment in the countries.

Herat’s Governor General Fazlollah Vahidi, for his part, underlined necessity of more cooperation between Iranian and Afghan businessmen, adding that Afghanistan businessmen are interested to use Iran’s technology and machineries.

Vahidi said that now, in industrial towns of Herat area, Iran made machineries are being used widely.

He appreciated Iran’s cooperation with Afghanistan and called for transferring Iran’s technology to Afghanistan and underlined necessity of increasing trade exchanges between the two countries.

In the exhibition, more than 30 Iranian firms from provinces of Khorasan Razavi, Golestan, Gilan, Mazandaran, Qazvin and East Azerbaijan as well as several Afghan companies are displaying their products for 5-day.