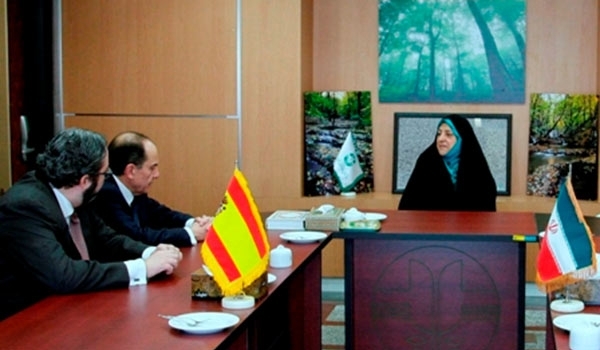 TEHRAN (FNA)- Iranian Vice-President and Head of the Department of Environment Masoumeh Ebtekar and Spanish Ambassador to Tehran Pedro Villena underlined the need for widening ties and cooperation in environmental areas.

In a meeting with the Spanish diplomat on Sunday, Ebtekar said that Iran is ready to share experience with Spain in environmental sector.

Iran believes that all the governments should cooperate in removing the challenges to the environment, she said.

Iran and Spain can have good cooperation in the field of climate change, biodiversity, protected zones, parks and dusts, Ebtekar further added.

No doubt that their presence in the upcoming event can pave the way for the country’s private sector in the Iranian market, Ebtekar said.

Spanish envoy, for his part, expressed pleasure over Iran’s programs about protection of the environment, saying that the Iranian programs will encourage Spain to boost cooperation with Iran.

He noted that Spain is eager to use Iran’s experience in the field.

“Spain also faces similar problems in certain areas, but, we have managed to tackle them through proper management of agriculture and promotion of greenhouse cultivation,” he said.

Iran and Spain have enjoyed amicable ties for centuries based on mutual understanding.