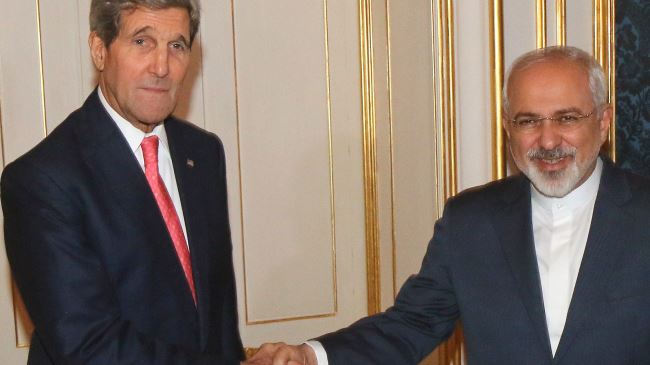 Iranian Foreign Minister Mohammad Javad Zarif (R) and US Secretary of State John Kerry shake hands prior to a bilateral meeting in Vienna on November 23, 2014.

The top Iranian and American diplomats held bilateral talks on Sunday as Iran and the P5+1 group of countries continue last-ditch nuclear negotiations before the Monday deadline for a final agreement.

The US secretary of state will later meet with Russian Foreign Minister Sergei Lavrov.

Iran and the P5+1 group of world powers – Russia, China, France, Britain, the US and Germany — have been holding talks in Vienna over the past six days to hammer out a comprehensive deal on Tehran’s nuclear program. Diplomats say the two sides have made progress but big gaps still remain.

Sources close to the Iranian negotiating team say the main stumbling block in the way of resolving the dispute over Iran’s nuclear energy program remains to be the removal of all the bans imposed on the country, and not the number of Iran’s centrifuges or the level of uranium enrichment.

An Iranian diplomatic source told Press TV on Sunday that the extension of Tehran’s nuclear talks with the six countries beyond the Monday deadline is not on the agenda of Vienna discussions.