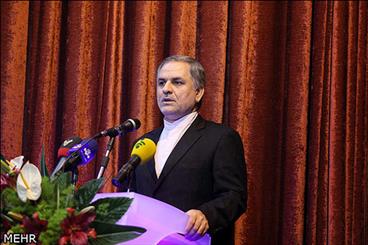 During his second press conference, Spokesman for the Ministry of Culture and Islamic Guidance Hossein Nooshabadi answered the questions by journalists. In response to a question about the removal of the film Prophet Muhammad (PBUH) from Fajr Festival due to the  appointment of Majid Majidi as the president of the jury of 33rd Fajr Festival, Nooshabadi said one of our main duties is to provide the right conditions to release the film Prophet Muhammad (PBUH) for the Iranian and international audience, since making the film is considered as one of the most important cultural tasks of the country.

“Displaying the high character of the Prophet Muhammad (PBUH), his full knowledge, insight and awareness that exist in this film,” he said “is considered as the most important achievements of Iranian cinema.”

“I think the films produced about the life of Prophet Muhammad (PBUH) by other filmmakers so far, have a lot of flaws and faults and for the first time in Iranian cinema, such an exemplary work in the Muslim world has been produced by Majid Majidi as a Muslim and professional filmmaker,” he added.

Pointing to Majidi’s high profile in filmmaking and his knowledge about religious issues, Nooshabadi explained that he believes Majid Majidi, as a Muslim director, can best introduce the real character of Prophet Muhammad (PBUH) to the world.

Regarding the international release of the film, Nooshabadi said Prophet Muhammad (PBUH) is not only for domestic use and for Iranian audiences, but also for the world.

“I am sure that Majid Majidi has made a great and lasting film and I hope we can take a big step in the internaional broadcasting of the film,” Nooshabadi added at the end.