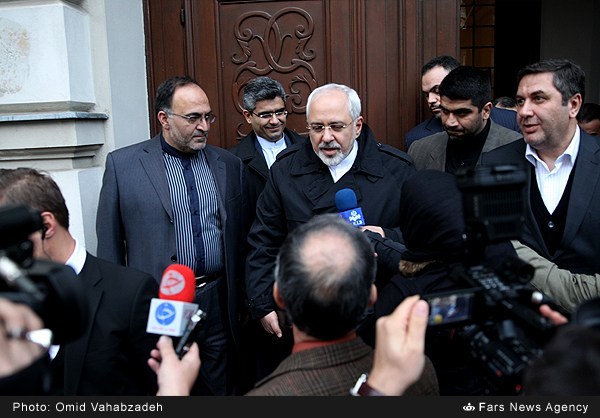 Iran’s Foreign Minister Mohammad Javad Zarif arrives for a working lunch with Catherine Ashton, the chief negotiator of the P5+1, in Vienna on November 18, 2014.

Iran’s foreign minister has described as “useful” his latest nuclear talks with Catherine Ashton, the chief negotiator of the P5+1 group, stressing the importance of the group’s “political will” to reach a final agreement.

“We had useful talks and decided how to advance the talks within the next days,” Mohammad Javad Zarif said after a working lunch with Ashton in the Austrian capital, Vienna, on Tuesday.

“Everything else depends on the opposite side’s political will,” the top Iranian nuclear negotiator added.

Earlier in the day, Zarif and Ashton attended a working lunch in Vienna as a November 24 deadline for a landmark nuclear agreement between Iran and the six countries approaches.

Iran and the P5+1 – the US, Britain, France, China, Russia, and Germany – are working to hammer out a comprehensive deal after they clinched an interim nuclear accord last November that took effect on January 20 and expired six months later. The deadline for the talks has been set for November 24.

Speaking to reporters upon his arrival in Vienna, Zarif expressed hoped that the ongoing final nuclear negotiations between Iran and the P5+1 would lead to a result that guarantees the country’s peaceful nuclear rights.

He added that it is still possible to work out a final resolution if the other side has the “political will to make a difficult decision”.

Zarif called on the P5+1 to stop drawing “meaningless redlines” which are only appealing to certain pressure groups and will do nothing to solve the nuclear issue.