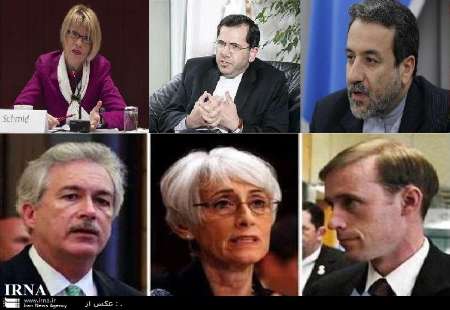 Vienna, Nov 18, IRNA – Top-ranking Iranian and US diplomats held bilateral talks in Vienna Tuesday afternoon as part of last efforts to end the dispute over Iran’s nuclear program as a deadline to reach a comprehensive deal looms.

First of all, Iranian Foreign Ministry deputies Majid Takht Ravanchi and Abbas Araqchi held talks with US Undersecretary of State William Burns and Wendy Sherman, the US top negotiator in Iran talks.

According to IRNA correspondent, the Iranian delegation to Vienna also held bilateral talks with their Chinese counterparts.

Expert-level talks in Vienna on different issues are to continue later in the day and on Wednesday in a bid to narrow gaps between the two sides.

Iran and the six world nations, widely known as the P5+1 – the United States, Britain, France, Russia and China plus Germany – have only six days to Nov 24 set as a deadline for clinching a final deal.