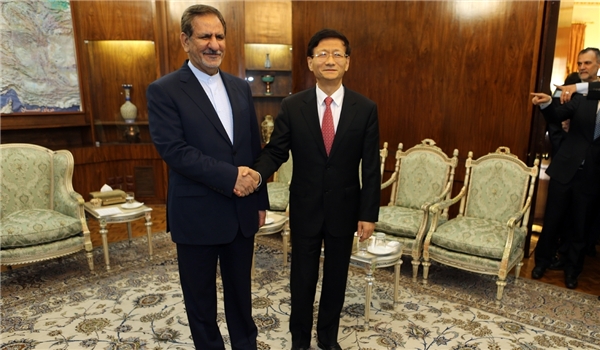 TEHRAN (FNA)- Iranian First Vice President Eshaq Jahangiri in a meeting with Head of the Central Politburo of the Chinese Communist Party Meng Jianzhu in Tehran on Monday underlined the need for Tehran-Beijing cooperation to confront extremism and terrorism in the region.

“The worst form of violence is underway in Iraq and Syria today and Iran is ready to cooperate with China in resolving the regional problems,” Jahangiri said during the meeting

The Iranian first vice president, meantime, thanked China’s positive stances in Iran-Group 5+1 (the US, Russia, China, France, Britain plus Germany) negotiations, and underlined the need for China’s more active role to resolve the remaining issues in a bid to achieve a final agreement.

Meng, for his part, reiterated that China has always had a positive role with regard to Iran’s nuclear rights at international level, and said, “Beijing is committed to the principle that the Iranian nation’s right to use civilian nuclear energy should be maintained.”

He pointed to the age-old Iran-China relations, and said, “Tehran and Beijing share close views on different issues, in specially regional and international issues.”

In relevant remarks in Beijing last month, Iranian Foreign Minister Mohammad Javad Zarif said the region is threatened by extremism and terrorism, but interference of the trans-regional powers would have even more dire repercussions.

Last month, Iranian Ambassador to China Ali Asqar Khaji said Tehran and Beijing share the common view that enhancing their ties would result in a much better outlook for both nations, and called on relevant officials and bodies to pave the ground for optimum utilization of the existing opportunities.

Khaji said that fortunately there are good potentials for cooperation between the two countries which enjoy historical background too.

He went on to say that presence of Iranians in different fields of science, culture, and economy in China is significant, and vowed to do his best to help the country’s tradesmen expand business with their Chinese counterparts.