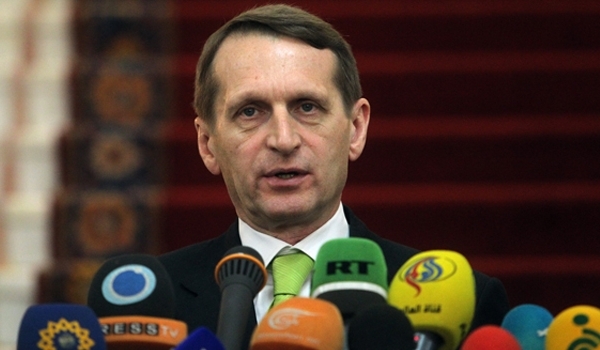 TEHRAN (FNA)- Chairman of the State Duma of the Russian Federation Sergei Naryshkin underlined his country’s readiness to cooperate with oil-producing states to control the fluctuating crude prices.

“We are ready for cooperation with oil producing countries to fix the prices at the international level,” Naryshkin said in a joint press conference with Iranian Parliament Speaker Ali Larijani in Tehran on Monday.

He also underlined that relations between Iran and Russia in different oil, gas, agriculture and nuclear energy are further developing “as this is in both countries’ interests”.

Describing Iran as the main actor in the establishment of stability in the region, Naryshkin said Tehran and Moscow have similar positions on different regional and international issues and “we are opposed to the performance of the westerners who are the main culprits behind the crises in different parts of the world”.

The falling oil prices in recent days has made OPEC (the Organization of the Petroleum Exporting Countries) members look for ways to stop this trend.

Iranian Oil Minister Bijan Namdar Zanganeh announced on Sunday that he had conferred on ways and mechanisms to prevent further price falls in the global market in meetings with high-ranking Qatari and Kuwaiti officials.

On Saturday, Zanganeh underlined that the OPEC members were determined to reverse the trend of the falling market prices.

“It is important that the OPEC members are feeling the necessity for strengthening cooperation to restructure the current situation in the market and it is OPEC’s responsibility to adopt proper action in this regard,” Zanganeh said after meeting the Venezuelan foreign minister in Tehran.

Referring to the 166th meeting of OPEC due to be held on November 27, he said, “It is important that all OPEC members narrow down the gaps in their ideas during their bilateral and multilateral consultations.”

OPEC is an international organization and economic cartel whose mission is to coordinate the policies of the oil-producing countries. The goal is to secure a steady income to the member states and to collude in influencing world oil prices through economic means.