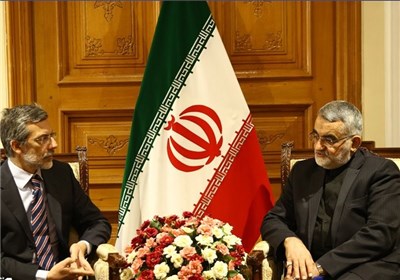 TEHRAN (Tasnim) – A senior Iranian lawmaker lashed out at certain Western countries for imposing sanctions against the Islamic Republic, describing the restrictions on the country as a “failed policy”.

“Sanctions have never been able to force the Iranian nation to step back from its rightful stances,” Chairman of the Iranian Parliament’s National Security and Foreign Policy Commission Alaeddin Boroujerdi said at a meeting with Italy’s new ambassador to Iran, Mauro Conciatori, in Tehran on Sunday.

The sanctions have resulted in huge financial losses for industrial and commercial companies in Europe, the Iranian parliamentarian added.

Elsewhere in his remarks, Boroujerdi touched upon Iran-Italy relations and stressed the need for discussions and consultations between specialized committees from the two countries’ parliaments.

Continued talks between the high-ranking Iranian and Italian officials can make the two countries’ stances on regional and international issues closer, he said.

Conciatori, for his part, called Iran “an important player” in the region, and said that the Italian officials believe that the resolution of regional crises is not possible without the Islamic Republic.

He also termed the process of nuclear negotiations between Iran and six world powers as “positive”, and expressed the hope that a final deal would be reached in the talks.

The Italian diplomat went on to say that the final agreement can help strengthen bilateral relations between Iran and Italy.

His remarks came ahead of a final round of nuclear talks between Iran and the Groups 5+1 (Russia, China, the US, Britain, France and Germany) to reach a comprehensive agreement on Tehran’s civilian nuclear program before a November 24 deadline.

The Geneva deal (the Joint Plan of Action) came into effect in January and expired in July, when the parties decided to extend negotiations until November 24 in the hope of clinching a final, lasting accord.