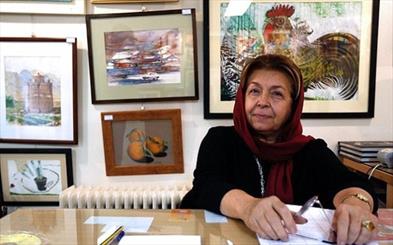 In an interview to Mehr News, Golestan told that she was probably nominated to the award since all her translations had been from French into Persian directly relevant to French culture and literature.

“I do not exactly know whether my career in running the gallery has played a part in my nomination; it is possible that they have considered my 26 years of activity in gallery in their judgement,” told Leili Golestan to Mehr.

She was very satisfied with the news of her nomination. “The authors whose books I have translated have been non-French but prominent writers and their books have been printed in French translations as well; authors such as books by Marquez and Italo Calvino,” she said.

“Some Iranian figures have received Chevalier award in culture and art such as Abbas Kiarostami, Shahram Nazeri, Pari Saberi, and others; however, Ordre des Palmes Académiques is different than these awards,” Golestan held.

“French Ministry of Education presents the award annually and French embassies around the world nominate individuals with respect to their contribution to French culture, art and literature,” she added.

“Artists Always Loved Money by Judith Benhamou-Huet is a comprehensive research on 13 artists and painters of 16th -20th centuries, where Benhamou-Huet accounts the vicissitudes of painters to bring their artworks close to money; the book is very attractive and breathtaking,” the translator said about her latest work, “when I was in France, the book had been newly printed,” she adds, hoping that the translation would be finished by the end of the year.

Commenting on running the gallery, Leili Golestan said that the job was very time-consuming, letting little time to the translation at hand. “I predict that the book will find many readers, since it is a documentary tale and very detailed book of history of the art,” she said.

The Ordre des Palmes Académiques (Order of Academic Palms) is an Order of Chivalry of France for academics and cultural and educational figures. It was founded by the Emperor Napoléon as a reward for devotion and accomplishment in the realm of teaching, scholarship, and research. Later, it was extended to non-French citizens to acknowledge their promotion to French language or significant achievement in the field of education.

Among Golestan’s notable translations are Oriana Fallaci’s Life, War and Nothing else; Gabriel García Márquez’s News of a Kidnapping and The Fragrance of Guava; Albert Camus’ The Stranger (L’Étranger); Eugène Ionesco’s Story Number 3; Christopher Frank’s Mortelle; Tistou with Green Fingers (Tistou les pouces verts)  by Maurice Druon; The Man that Had it All, All, All by Miguel Angel Asturias Rosales and Romain Gary’s Man with a Dove.