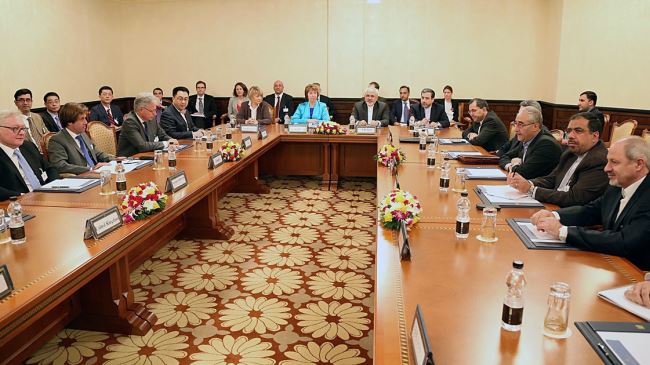 London, Asharq Al-Awsat—Negotiations on the Iranian nuclear file between Iran, the US and the EU have not achieved the desired outcome according to sources in Iran. The failure to come to a consensus has put all sides under further pressure to rescue talks before a November 24 deadline.

The Nuclear Iran website, which has close ties to Iran’s conservatives and security agencies, revealed on Friday that an overall agreement that does not stipulate the precise details of a deal is being seriously considered as the only option by President Hassan Rouhani’s government before the deadline elapses.

The talks, held in the Omani capital Muscat, were intended to reconcile crucial differences between Iran and Western powers over the permissible number of centrifuges Iran can operate, as well as the timing and extent of lifting sanctions.

No concrete agreement was achieved in Muscat and all sides are returning to their capitals before meeting again in Vienna this week for further consultations.

Iranian MP Alaeddin Boroujerdi and chairman for the Committee for Foreign Policy and National Security for Iran’s parliament said that “the Muscat talks were challenging, serious and bitter and the final comprehensive agreement has to be ratified by the majles [parliament],” according to the Daneshjoo news agency in Tehran.

The requirement for parliament’s ratification relates to Iran’s decision on signing up to the “Additional Protocol” for members of the Nuclear Non-Proliferation Treaty. The additional protocol permits unrestricted inspections of nuclear sites of any signatory state by the International Atomic Energy Agency.

The Iranian negotiating team says the Islamic Republic has not crossed the “red lines” set out for them and is pressing hard for the removal of sanctions as the required result for any agreement, Boroujerdi added.

The US position of a gradual removal of sanctions in return for a substantial halt in Iran’s enrichment program as well as transparency guarantees over the course of the next 10–20 years has upset the Iranian leadership. The US stance has failed to appease the serious doubts of Iran’s Supreme Leader Ayatollah Ali Khmamenei over whether the US is genuine in its efforts to resolve the nuclear issue.

Cyrus Nasseri, the former Iranian nuclear negotiator during Mohammad Khatami’s presidency has also revealed that reaching an overall agreement without finalizing the details is in interests of the Islamic Republic and said there would be “time for hammering down the details after the overall agreement.”

The conservative faction is under immense pressure to accept a half-baked agreement. They fear another drawn-out negotiating process that will put Iran at a disadvantaged position over enrichment capacity while the sanctions will by and large remain in place.