While criticized at home, the back-channel missive may set the stage for real detente

Anyone perturbed by the revelation that Barack Obama wrote a secret letter to Iran’s supreme leader regarding the ongoing nuclear negotiations probably has no stomach for what might be coming next.

The window for a deal between Iran and world powers is closing — making next week’s talks the most crucial yet in the effort to curb Iran’s nuclear ambitions.

If there is a deal to be made — and both Washington and Tehran seem to be taking turns playing one down — it is going to be done soon.

The deadline is Nov. 24, and though it probably can be extended a little, there’s not much room: the anti-Iran-deal Republicans take over the Senate in January, and they are in no mood for compromising with an old foe they believe is hoodwinking the West.

In fact they’d be happy with imposing new sanctions to pile on top of those already slackening the Iranian economy.

Obama, however, seems to want this deal. He believes Iran’s nuclear program can be limited and more closely monitored via these negotiations, with international sanctions eventually and gradually being lifted.

For him, such a deal would be a significant foreign policy legacy.

For the U.S., the opportunity to make peace with Iran has taken more than a generation to present itself, and if missed could take another generation to come around again.

That means compromises. That means writing letters to a controversial figure, Ayatollah Ali Khamenei, in which Obama reportedly makes controversial proposals — proposals that could be viewed as necessary pragmatism, or, in the words of one critic, “utter ineptness.”

Welcome to the Middle East

According to the Wall Street Journal, which broke the story about the letter last week, Obama appealed to Khamenei for a deal by Nov. 24, and apparently linked it to the possibility of coordinating a fight against a common enemy, ISIS.

Iran had hinted the deadline was coming too fast.

Washington won’t confirm or deny what would be private communication between two world leaders. (Though Iranian officials said this week that there has indeed been an exchange.)

But anyone suggesting that the Iranian nuclear talks would be conducted in a vacuum, independently of all other regional considerations, is either obfuscating or confused.

This, after all, is the Middle East. Everything is linked. A controversial leader to whom you’ve just written a letter could, for example, unleash an anti-Israel tirade — as Khamenei did this week on Twitter — which in turn sets off the Israeli prime minister, who warns again against a bad deal with Iran.

That makes negotiations harder. The cleanup is left to U.S. Secretary of State John Kerry, who is busy enough with the heavy lifting on these negotiations, which already make many U.S. allies nervous.

Because everything the Middle East is linked — and because the U.S. is once again wading militarily into neighbouring Iraq — Washington cannot ignore the fact that Iran, a Shia Muslim nation, is a central player in the region.

It has significant influence in Iraq, Syria, Gaza, Lebanon and beyond. Plus, it too sees the Sunni extremist ISIS as a threat. 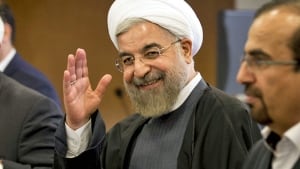 Iran’s new president, Hassan Rouhani, has been a much cheerier personality than his more hard line predecessor. But he still takes his marching orders from Iran’s supreme leader, Ayatollah Ali Khamenei. (Reuters)

That the U.S. could sit across from Iranian officials and leave all that out entirely is almost unthinkable.

That Obama might broach a broader co-operation with Tehran in a letter to the most powerful man in the country seems entirely predictable and based on hopes the Iranian regime might actually engage.

That he would do it as their respective officials meet in marathon talks, following agreement on an interim deal, actually seems quite straightforward.

What’s not clear is whether the letter was leaked by someone, possibly in the administration, to put pressure on Obama, or the Iranians.

Yes, there is history

As everyone knows, the U.S. and Iran have been at odds since the Iranian revolution in 1979 (when 52 Americans were held hostage for over a year).

More recently, the U.S. and Europe imposed sanctions over Iran’s apparent drive to acquire the technology necessary to develop a nuclear weapon.

Bent on changing the relationship, Obama started his conversation with Iran shortly after he became president, in a video address to the Iranian people that acknowledged there was probably a better way forward for the two nations. He offered a “new beginning.”

The letters, meanwhile, also apparently began early in Obama’s presidency. And it appears that they have worked: reports from Iran this week indicate that some of them have elicited letters in response. We don’t know the details.

But if you take the long view of the Iran-U.S. relationship, the letter exchange is historic. And could form the basis of a rapprochement that would turn world politics around.

That shift has been coming for some time.

Obama wouldn’t be the only world leader to try for a détente with Iran since Hassan Rouhani became president last year and since the nuclear talks began to bear fruit.

An unsmiling British Prime Minister David Cameron was photographed with Rouhani after the two met at the UN General Assembly in September, marking the first such meeting since 1979.

Earlier this year, Iran and the U.K. agreed to re-establish direct diplomatic relations. Their respective embassies are still closed, but the new non-resident charge d’affaires scheme is clearly a step towards more normalized relations.

On the nuclear front, Western powers clearly want a deal. So does Tehran. Not just to improve its world standing, but to boost its sanctions-saddled economy. To sell oil. To satisfy a highly educated citizenry that is demanding, and discerning in its hopes for a nation that has too long been held back by extremist thinking.

None of that can happen without Tehran and Washington seeing eye to eye.

Having walked this far down the road of rapprochement, neither side can really afford to back down now.

Obama has chosen engagement, and, occasionally, that might require the odd letter.