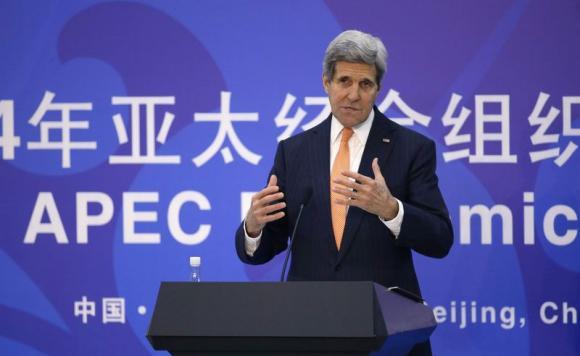 U.S. Secretary of State John Kerry gestures as he speaks to the media during a news conference on the sidelines of the Asia-Pacific Economic Cooperation (APEC) Summit at the China National Convention Centre (CNCC) in Beijing November 8, 2014.

(Reuters) – U.S. Secretary of State John Kerry said on Saturday that there was no link between talks on Iran’s nuclear program and other issues in the Middle East.

The United States has already rejected a proposal floated by Iranian officials in which Tehran would cooperate in the fight against Islamic State forces in exchange for flexibility on its nuclear program.

“No conversation, no agreement, no exchange, nothing, has created any kind of deal or agreement with respect to any of the events that are at stake in the Middle East,” Kerry told reporters in Beijing.

“There is no linkage whatsoever of the nuclear discussions with any other issue, and I want to make that absolutely clear. The nuclear negotiations are on their own.”

The Wall Street Journal reported on Thursday that Obama sent a letter to the Iranian leader last month describing their shared interests regarding Islamic State.

Kerry is to meet Iran’s foreign minister in Muscat, Oman on Sunday, ahead of a Nov. 24 deadline for a comprehensive nuclear deal between Tehran and six world powers.

The new U.S. Senate, in which opposition Republicans will have a majority following midterm elections on Tuesday, is likely to be skeptical of any Obama deal with Iran. The U.S. President and Kerry are keen to avoid the impression they are making trade-offs as part of the nuclear deal.