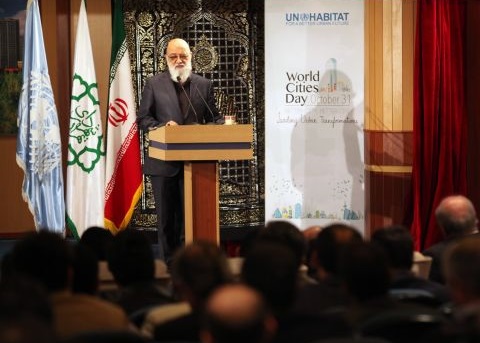 TEHRAN – On 1st November 2014, World Cities Day was celebrated in I.R.Iran like many other countries with the theme “Better City, Better life, Leading Urban Transformations”.

The UN-Habitat office in Tehran celebrated this event jointly with the Municipality of Tehran in a half-day ceremony with participation of the Chairman of Tehran City Council, Deputy Minister of Roads and Urban Development; UN-Habitat and FAO Representatives and senior municipality and government officials and members of the diplomatic core.

Mr. Serge Nakouzi, Representative of FAO in I. R. Iran, read the message of the United Nations Secretary General on World Cities Day. He also pointed to the purpose of World Cities Day that is to promote the international community’s interest in global urbanization, push for cooperation among countries in meeting opportunities and challenges in urbanization and contribution to urban sustainable development around the world. He also referred to the Habitat III Conference and said that this conference, which is to be held in 2016, offers the opportunity to define a new urban agenda.
Mr. Siamak Moghaddam, Representative of UN-Habitat in the I.R.Iran, read the message of UN-Habitat Executive Director in this ceremony. In his speech Mr. Moghaddam emphasized on the participation of people and communities in municipal affairs and management, and invited Iranian officials to document the experience of Iran in urban planning and urban management for an active participation and contribution to the Habitat III Conference.
Mr. Gilabadi, Advisor to Tehran Mayor and President of Communications and International Affairs center of the Municipality of Tehran introduced recent achievements of the municipality in developing urban infrastructures.
Mr. Seyed Mohammad Pejman, the deputy Minister of Roads and Urban Development referred to the rapid increase in urbanization rate in the last 50 years and its consequences. He indicated that the volume of transformation and challenges was sometimes beyond the national economic potentials and macro planns did not have enough sensitivity to review and consider all aspects of this transformation.
In the concluding speech, Mr. Mahdi Chamran, Chairman of Tehran City Council referred to rural-urban migration and how it had caused informal settlements and slums formation around the city. He also emphasized on considering social and human aspects of cities, including sense of city identity among citizens, in addition to physical development of urban areas.
In the latter part of the ceremony, a panel discussion was held with participation of three academicians, a member of the city council, a local officials and the representative of UN-Habitat in I.R.Iran. The discussions touched upon integrated forward-planning urban approach, slums upgrading with special focus on community participation and enabling and empowering local people, making livable cities through building capacity and improved urban competitiveness.