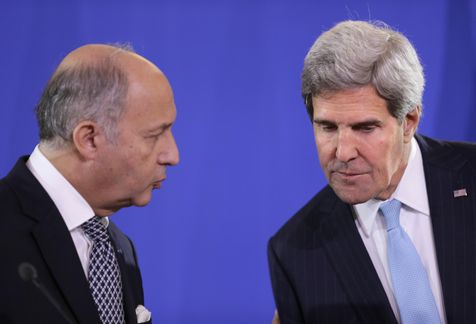 PARIS (AP) — With time running out on the latest round of negotiations, France and the United States on Wednesday stepped up demands for Iran to prove that its nuclear program is peaceful – or risk scuttling the closest chance for a deal in years and losing a chance to ease crippling sanctions on Tehran’s economy.

The entreaty to Tehran comes days before Secretary of State John Kerry is to meet with top diplomats to Iran and the European Union on how to break the years-long deadlock before a Nov. 24 deadline.

At issue is Iran’s demand to generate nuclear power for energy, medical and other benign purposes for its people. But much of the rest of the world fears that Tehran – which has hindered fully transparent inspections of its reactors over the years – wants to build an atomic weapon.

“They have a right to a peaceful program but not a track to a bomb,” Kerry said after meeting with French Foreign Minister Laurent Fabius. “We believe it is pretty easy to prove to the world that a plan is peaceful.”

On-and-off negotiations between Iran and world powers have languished for years without resolution, and the last time the two sides came close to a deal was in 2008.

But world powers saw a new opening with the 2013 election of Iranian President Hassan Rouhani, who campaigned to end bruising Western sanctions to punish Tehran for its nuclear production.

Fabius called it “very important” for the U.S. and France to keep a united front as the negotiations enter the final stretch.

His comments underscored the strong possibility that the Washington could change its negotiating track – or drop it altogether – after Jan. 1, when Republicans will be in charge of both houses of Congress. Many Republican leaders have criticized the Obama administration’s desire to ease sanctions on Iran while the talks are underway, or to embrace any agreement that would allow Tehran to continue generating nuclear power.

Israel has also objected to the negotiations, which have become a sore point between Washington and Tel Aviv.

While in Paris, Kerry also met with former British Prime Minister Tony Blair and Jordanian Foreign Minister Nasser Judeh – both of whom have been focused on the stagnant effort to broker a peace agreement between Israel and Palestinian authorities.