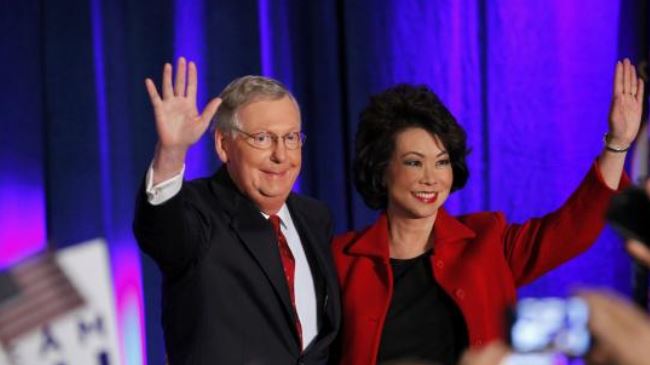 Mitch McConnell and his wife, former US Secretary of Labor Elaine Chao, at election night rally in Louisville, Kentucky

In a punishing blow to US President Barack Obama, Republicans have secured a majority in the US Senate in crucial midterm elections, according to the exit polls.

The Republican Party picked up at least seven Senate seats to guarantee at least 52 seats of the 100-member chamber, the results show.

Democratic Senator Mary Landrieu of Louisiana, however, forced her tough re-election fight into a runoff against Republican Bill Cassidy in Louisiana in December.

The outcome of a closely fought race in Louisiana will be determined in a run-off in December.

The midterm elections are deciding 36 senators, 36 state governors and all 435 members of the House of Representatives.

The outcome foreshadows a tougher final two years for President Obama under a greater Republican power and influence in Washington.

Analysts believe that the poll is a referendum on the policies of the president who has lately been facing a low approval rating which was mostly driven by concern over Obama’s economic record.