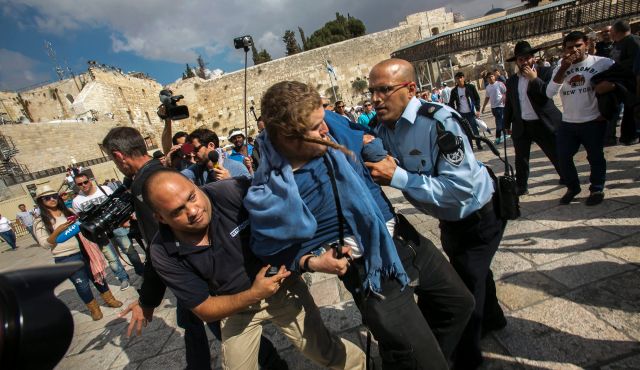 Under U.S. pressure, Netanyahu calls for restraint on Temple Mount

Right-wing activists are arrested in Jerusalem after trying to break into the closed Temple Mount, Oct. 30, 2014. Photo by Olivier Fittousi

Prime Minister Benjamin Netanyahu called on Israeli parliamentarians to ease tensions over the Temple Mount on Saturday, following a conversation with U.S. Secretary of State John Kerry, who asked him to work to reduce tensions in Jerusalem.

In a statement released Saturday, the prime minister also urged Knesset members to show “responsibility and restraint” vis-à-vis the site, holy to both Jews and Muslims.

In addition, Netanyahu spoke Saturday night with Knesset Speaker Yuli Edelstein on the matter and asked him to work with Knesset members to resolve the issue.

On Friday, Kerry and Netanyahu spoke by phone, during which the U.S. secretary of state asked the Israeli prime minister to work to reduce tensions, stop the escalation of violence in Jerusalem and to maintain the status quo on the Temple Mount.