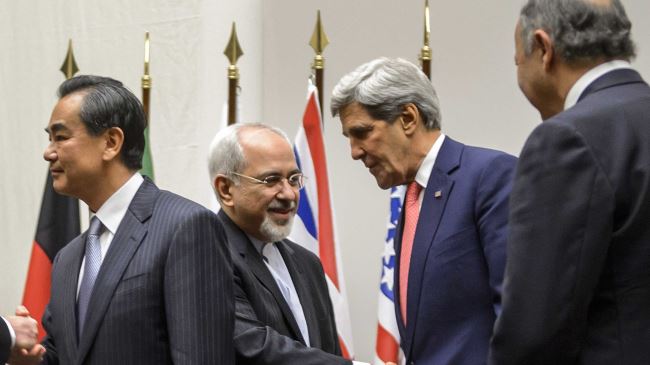 US Secretary of State John Kerry will meet Iran’s Foreign Minister Mohammad Javad Zarif on November 9-10, in the next stage of talks pursuing a comprehensive nuclear agreement before a November 24 deadline.

The European Union’s Catherine Ashton will also attend the discussions, to be held in Oman.

Kerry said on Friday that he was ready for “a slog” of negotiations in Oman, followed by high-level discussions in Vienna between Iran and the 5+1 Powers (US, Britain, France, Germany, China, and Russia).

“We’re closer than we were a week ago or 10 weeks ago,” Kerry said. “But we’re still with big gaps.”

The Secretary of State then put the onus of reaching an agreement on Tehran, saying he feared that the Iranians would “get stuck in a tree of their own making, on one demand or another”.

Kerry referred in general to four issues which have not been resolved: 1) the number and level of Iran’s centrifuges for uranium enrichment; 2) the “secret underground facility” at Fordoo for enrichment; 3) the under-construction Arak heavy-water nuclear reactor, which would produce plutonium by-product; and 4) possible covert programs for a nuclear weapons.

In a notable development of the regime’s line on the recent acid attacks on women, Tehran Friday Prayer leader Kazem Seddiqi assured worshippers that that the assaults are a “plot” to prevent proper enforcement of hijab and Islamic behavior.

Mass public protests last week challenged the regime, blaming the attacks on a Parliamentary bill protecting those who challenge “un-Islamic” dress and other perceived moral violations.

However, Seddiqi said the series of assaults on women in Isfahan had nothing to do with such moral enforcement. To the contrary:

Some people are trying to create the impression that promotion of virtue and prevention of vice is to disrupt public security….

[Acid attacks are] a plot to overshadow the legislation on promotion of virtue and prevention of vice, which is a religious obligation.

The speech was an effective challenge to President Rouhani, who said 10 days ago, “The sacred call to virtue is not the right of a select group of people, a handful taking the moral high ground and acting as guardians. It is upon all Muslims to exhort love, respect for others and human dignity.”

In the past week, high-level officials have resisted any attempt to repeal the Parliamentary bill. They have insisted that the attacks have been instigated by foreign media as part of the subversion of the Islamic Republic.

Speaking in New York on Friday, International Atomic Energy Agency head Yukiya Amano called for more cooperation from Iran, to assure that its nuclear program does not include pursuit of a military dimension.

Amano said, “What is needed now is action,” to fulfil guidelines agreed between the IAEA and Iran in November and February.

In August, the IAEA said Iran had yet to fulfil two of five guidelines, including information on explosive detonators which could be used in a militarized nuclear effort.

Amano said he thought the issues could be resolved in a year or two: “This is not a never-ending process.”